Huorns were creatures much like Ents, although they do not appear to have been truly sentient.

The origin of the Huorns is unknown. It is not clear if Huorns were Ents that had become tree-like, or trees that had become Entish. Perhaps both varieties existed, though the Hobbit Meriadoc Brandybuck believed the former was true.[1] Either way it is obvious they were part way between trees and Ents.[2]

In the Third Age, the Huorns lived in Fangorn Forest,[1] though it is possible that the trees of the Old Forest, especially Old Man Willow, were Huorns as well.

During the War of the Ring, Huorns were aroused by Treebeard to destroy Nan Curunír.[1] Gandalf saw the shadow of these Huorns, as he rode with the host from Edoras to Hornburg.[3][4] Directed by the Ents, the Huorns also helped the Rohirrim to fight the Orcs at the Battle of the Hornburg.[1]

Huorns had great power and could wrap themselves in shadow. When angry, they were able to move with great speed. The Huorns further had voices, as they could speak with the Ents. When no Ents looked after them, the Huorns were "queer and wild", a threat to the Free peoples.[1]

The first element of huorn might be derived from the root KHUG-, and the second element is Sindarin orn.[6]

Apparently, there was also a much longer Entish word for huorn.[1] 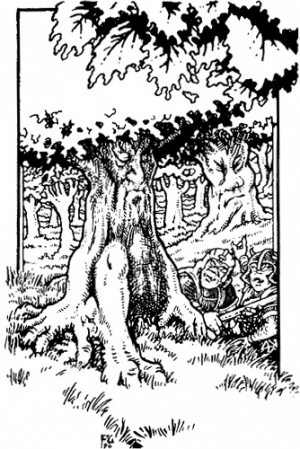 Huorns are classified as Animate Plants (Monsters). The evil, "blackhearted" ones, went away from Fangorn Forest and the protection of the Ents and settled in Mirkwood. Huorns eat living beings, and they come in as many different forms as trees do. Old Man Willow is a Huorn of the Old Forest.[7]

Huorn is an Awakened Plant (Creature), able to inflict one strike on a player.