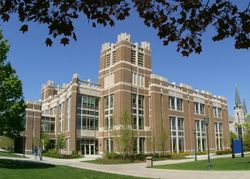 Marquette University is a private Jesuit research university in Milwaukee, Wisconsin, established in 1881.

The university is well known for holding a large number of J.R.R. Tolkien's original manuscripts (more than 11,000 pieces). William Fliss is the Marquette University Archivist who maintains the collection. Matt Blessing was previously in charge of maintaining the collection (1999-2012).

[edit] History of the collection

In late December 1956 or early January 1957 William Ready, the Director of Libraries at Marquette University, was compiling the University's research-related collections and he asked Bertram Rota, a well-known London bookseller if she could approach J.R.R. Tolkien to see if he was willing to sell the original manuscripts of The Hobbit and The Lord of the Rings. Rota wrote to Tolkien and prior to January 10th Tolkien replied.

On January 10th, Bertram Rota responded to William Ready at Marquette. Tolkien was willing to consider selling his manuscripts but asked what amount the University was willing to offer. He sent a list of The Hobbit and The Lord of the Rings material he considered selling. Rota suggested to Ready a minimum offer of £1,000, however she would have liked to examine the documents personally before the final decision was made. At last the price was set to £1500.

This arrangement was finalized in May of 1957, and a significant amount of material was transferred across the Atlantic that June, with The Lord of the Rings material being sent mostly in 1958 and later additional material being sent by Christopher Tolkien when discovered in his father’s papers.[1]

The Marquette University had held a number of exhibitions focused on Tolkien.