The Battle of the Hornburg took place at the mountain fortress of the Hornburg in the valley of Helm's Deep in Rohan. Taking place over the night of the 3-4 March T.A. 3019, it saw the attacking Isengard-host of Saruman defeated by the Rohirrim led by Théoden and Erkenbrand.

The army was reinforced by 1000 scattered Rohirrim troops from the Westfold rallied by the Wizard Gandalf and led by Erkenbrand. A forest of Huorns entered the valley independently, seeking revenge on Saruman's Orcs.

The army of the corrupted Wizard Saruman, amassed both in service and in competition of his Lord Sauron, consisted of his Orcs, mainly his specially bred Uruk-hai and Half-orcs, supported by Dunlendings. It was mentioned to consist of "about ten thousand Orcs", with an unknown but far smaller number of Dunlendings.[1]

On March 3, seeking to take the fight away from his people, Théoden brought around a thousand horsemen to the Fords of Isen along with any others in Edoras. On their way they found Ceorl who reported a defeat to the Fords; King Théoden then redirected his troops to Helm's Deep, which was commanded by Gamling in his lord Erkenbrand's absence.

The forces from Isengard arrived at the valley of Helm's Deep in the middle of the night and quickly scaled over the first defence, Helm's Dike, and attempted to break down the fortress's gate with a battering ram. But Aragorn, Éomer, and some other Rohirrim attacked, through a postern gate on the side of the Hornburg, scattering the forces threatening the doors. 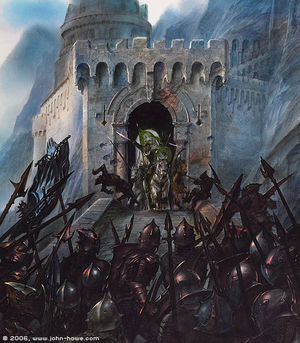 The Charge of the Rohirrim at Helm's Deep by John Howe

However, the enemies reentered the culvert and caused an explosion using a device of Saruman's. This made a wide hole in the wall, and the Isengarders could not be stopped. The defenders retreated to the Glittering Caves and to the Hornburg. Soon Saruman's forces used their blasting fire to gain entrance to the keep. At this moment, however, the horn of Helm's Deep was sounded, and after a moment a sortie led by Théoden and Aragorn rode forth, followed by men on foot from the keep, and the defenders of the caves, who made a break-out attempt and were driving the enemy out of the deep. Théoden and Aragorn cut through the Orcs and Dunlendings and arrived at Helm's Dike.