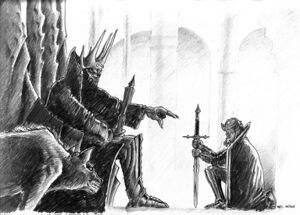 Morgoth and Sauron by Eric Faure-Brac

The Dark Lord, Dark Power or the Enemy were names given to the two major foes of the Free Peoples of Middle-earth: Morgoth, the mighty rebel Vala, and Sauron, the great subversive Maia.

When Morgoth ruled in Utumno, he took the form of a dark lord, tall and terrible. Thereafter, before approaching Ungoliant after escaping from the Valar's service, he took the same form, in which he would remain for ever.[1] Once in Angband, he forged an Iron Crown and proclaimed himself "King of the World".[2] He was, though, often called Dark Lord since then.[3] In the Third Age, Tom Bombadil will remember him by this title.

In the Second Age, his former lieutenant Sauron followed in his footsteps, becoming his successor. He first tried to subdue the Free Peoples with the Rings of Power, disguised as Annatar, but after being discovered, he began conquering Middle-earth with military power, also taking pretentious titles like "Lord of the Earth" as its self-styled ruler. Since then, though, he was often called Dark Power or Dark Lord,[4] especially by Men, who avoid the mere uttering of his name.[5]