Ungoliant was an evil spirit in a form that greatly resembled a massive Spider. She once dwelt in Avathar prior to the Darkening of Valinor, which she caused moved by Morgoth.

Ungoliant's origins are shrouded in mystery. It is thought that she may have been one of the Maiar, or a lesser spirit, whom Melkor corrupted long ago, but she is not listed among the known Ainur. It is also said that she came from the darkness above the skies of Arda, leading some to believe that she may be an incarnation of darkness or emptiness itself. What is known is that during the Years of the Trees she had disowned Melkor and lived independently in Avathar.[1]

After Melkor sowed discord among the Noldor and fled Valinor, he sought Ungoliant's aid in his attack on the Two Trees of Valinor. She helped Melkor infiltrate Valinor by shrouding both herself and her ally in webs of pure darkness. Once within Valinor, Ungoliant drank the light from the Two Trees after Morgoth wounded them with his spear, known as the darkening of Valinor. She also drained dry the Wells of Varda so that nothing remained of the Light of the Two Lamps save that of the Silmarils of Fëanor. After this terrible act, Ungoliant and Melkor fled to Middle-earth to escape justice at the hands of the Valar.[2] 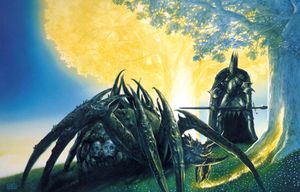 The Killing of the Trees by John Howe

In order to gain Ungoliant's assistance, Melkor had promised to reward her and bestowed her with some of his own power.[3] After their flight from Valinor, the Dark Lord indeed gave her many gems of the Ñoldor. However, he withheld the Silmarils in his right hand, having desired them too greatly to allow the Great Spider to devour them. The enraged Ungoliant wrapped Melkor in her webs, and poised to devour him as punishment for his perceived betrayal. Ungoliant had grown far larger and stronger than before from Melkor's gifted strength and by absorbing the light of the Two Trees, and Melkor in turn had exhausted himself from his previous efforts. Indeed, the Gloomweaver would have killed Melkor had not his cry of desperation been heard by his Balrogs, who left their vaults beneath Angband, and going over Hithlum came to Lammoth as a tempest of fire, saving their master.[4]

Ungoliant's webs being destroyed by the Balrogs' fiery whips, she fled in fear to the Ered Gorgoroth in Beleriand. There, she had many offspring, including Shelob, which spread throughout the Ered Gorgoroth and gave it a reputation as a place of horror. She also attempted to enter Doriath, the realm of Thingol, but was stayed by the power of the Maia Melian. Ungoliant herself eventually disappeared from history, but her final fate is not precisely known; it is said that she went into the forgotten south of the world shortly before the rising of the Sun, and some have said that she eventually let her ever growing hunger overcome her and devoured herself at last.[5]

The name is pronounced [uŋˈɡoljant]. In the form Ungoliant the name is technically Sindarin, but is a direct loan from Quenya Ungweliantë (ungwë + liantë: "dark spider"; pron. [uŋʷˌɡʷeliˈante]); the strictly Sindarin form being Delduthling "Horror Night Spider".

In The Book of Lost Tales, Ungoliant's history is even more mysterious than what is implied in the published edition of The Silmarillion. Here, even the Valar did not know of her origins, and she was portrayed as a primeval spirit of night, and believed to be a creature bred of the darkness of the Void.

Also, Melkor and his companions encounter Ungoliant in her lair (here, known as Arvalin) by coincidence while fleeing from the Valar.

Melkor and Ungoliant are shown to be on much friendlier terms with each other than what is shown in later versions of The Silmarillion, as Melkor willingly offers the jewels that were stolen from the Elves, apart from the Silmarils (the Theft of the Silmarils occurring before the Darkening of Valinor, in this version).

She is wounded after the poisoning of the Golden Tree by a lone Elf named Daurin, whose sword is poisoned by her blood. While Ungoliant is recovering from her wound, Melkor kills Daurin and uses his sword to mortally wound the Silver Tree. After the Darkening of Valinor, instead of fleeing with Melkor, Ungoliant immediately flees southwards towards her lair, and successfully eludes the Valar.

In an early sketch of the voyages of Eärendel in the Lost Tales, Tolkien considered to have Eärendel meet her (as Wirilomë) in his travels, which Christopher Tolkien found surprising.[6] In the first sketch of the Silmarillion (1926) intended to "reboot" the legendarium, Earendel slew Ungoliant.[7]

In the Later Silmarillion, as documented in Morgoth's Ring and War of the Jewels, Ungoliant is explicitly identified as one of Melkor's servants who abandoned him prior to settling in Avathar. She is also depicted as starving to the brink of death during her time in Avathar, cut off from the light of the Valar by her own webs of darkness. She is also shown to fear her master, and hides desperately from Melkor when she first sees him approaching her lair. She initially refuses to emerge (believing Melkor plans to murder her for deserting him) until he threatens to bury her within her lair, whilst enticing her with an assortment of gems he had stolen from the Noldor. She accepts his offer, and regains the strength needed to destroy the Two Trees, which she does alone while Melkor brings ruin elsewhere in Aman. Here she likewise drank dry the Wells of Varda and grew massive in power and hideous in form, and even Melkor was aghast to see her. Though he had planned to forsake his servant, she is able to find him and the two escape, her darkness setting the pursuing Valar into confusion and dismay. It is unclear in this version of events if Ungoliant ever turned on Melkor herself.[8]

In the Fall of Gondolin, it is stated that Ungoliant devours herself in hunger after she goes south in the First Age.

Ungoliant has not appeared in any adaptation of Middle earth works so far, and is mentioned only in the following adaptations:

While discussing the darkness that has fallen over Mirkwood, Radagast describes the spiders there as "some kind of spawn of Ungoliant".

Ungoliant is mentioned twice: The first time is in a memory attached to the "Crushed Ungol Egg" artifact, during which Sauron's servant addresses Shelob as the "last daughter of Ungoliant". She is mentioned again when Talion and the Wraith discuss the Ungol spiders that infest Mordor.