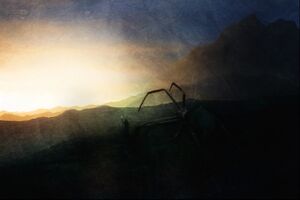 The Unlight was a creation of the spider-like entity Ungoliant. It is described as a vast darkness that no light can escape or penetrate. As Ungoliant devoured the Light of the Trees, she brought forth the Unlight, and "it seemed not lack, but a thing with being of its own, that made by male out of Light had the power to pierce the eye, to enter the heart and mind and strangle the very will".[1]:289

Ungoliant wove this darkness into webs, which covered her lair in Avathar. She wove it as a cloak to conceal her and Melkor from the eyes of Manwë during the Darkening of Valinor.[1]:284 Even Tulkas, the strongest of the Valar, was unable to break through it when he pursued Melkor and Ungoliant from Valinor.[2] When Ungoliant was denied her full reward from Melkor, she ensnared him in her Unlight. However, the webs were torn asunder by the fire of the Balrogs' whips, when they came to their masters' aid.[3] In Valinor, the winds of Manwë rolled back the shadows of Ungoliant to the sea.[4]

Though Ungoliant's descendants were incapable of producing Unlight, the webs they wove proved formidable, as they were strong enough to entrap even the mightiest warrior, and dark enough to prevent light from entering their lairs.[5][6]

In The Book of Lost Tales, the cloak that Gwerlum/Gloomweaver creates is one of invisibility rather than darkness.[7] Later, the webs left in Valinor after the theft were used by the Valar to cover the Shadowy Seas during the Hiding of Valinor.[8]