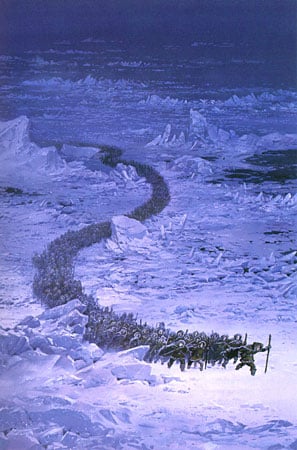 He and his sons soon swore the Oath of Fëanor, saying that no one, not Elf, Man, or even Vala, shall steal or keep the Silmarils from them. They named Manwëe, Varda, and even Eru as witnesses, swearing the Void upon them if they failed.

Prevailing over those who opposed himk Fëanor drove his people northward, not letting them stop to fully consider their actions. Only one tenth of the Noldor stayed and did not leave with Fëanor. The rest went with him towards an uncertain future. Yet even as the exiles left Tirion, a messenger from Manwë appeared, saying that the exiles would get no help from the Valar and that the quest was hopeless. Fëanor scoffed and sent the messenger away. The exiles left Tirion forever, some less willingly than others.

The exiles went northwards until they reached the Great Sea of Belegaer. Fëanor realized that he had no boats to reach Middle-earth. However, the Teleri elves, master ship builders, did have boats. He went to them and tried to persuade them to give them boats. The Teleri, however, did not give him any help or boats, and tried to persuade him and the rest of the exiles to abandon the quest before it was too late. Fëanor left the city in rage and brooded until he decided to take the boats by force. The Noldor stormed the docks and began taking the ships. The Teleri resisted, at first trying to avoid violence but before long, they started pushing the Noldor into the water. The situation escalated as the Noldor retaliate and used their weapons and armor to force the Teleri to retreat. Elven blood was shed by Elves in what would be later known as the first Kinslaying.