The Oath of Fëanor was a dreadful irrevocable oath taken by Fëanor and his seven sons in the city of Tirion to pursue any in Arda who may take and withhold from them any of the Silmarils. 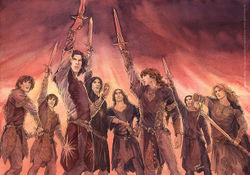 Be he foe or friend, be he foul or clean,


brood of Morgoth or bright Vala,
Elda or Maia or Aftercomer,
Man yet unborn upon Middle-earth,
neither law, nor love, nor league of swords,
dread nor danger, not Doom itself,
shall defend him from Fëanor, and Fëanor's kin,
whoso hideth or hoardeth, or in hand taketh,
finding keepeth or afar casteth
a Silmaril. This swear we all:
death we will deal him ere Day's ending,
woe unto world's end! Our word hear thou,
Eru Allfather! To the everlasting
Darkness doom us if our deed faileth.
On the holy mountain hear in witness

The above quoted words come from the Annals of Aman[3] but in the published Silmarillion there is only a narrative description of the Oath.[4]