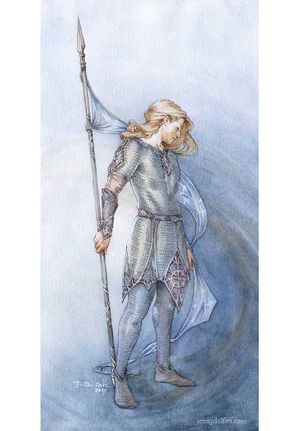 The Fall of Gil-galad was a lay that told of the loss of Ereinion Gil-galad, the last Great Elf-king of Middle-earth, in the Siege of Barad-dûr at the end of the War of the Last Alliance.

According to Aragorn, it was originally written in an ancient tongue. It seems to be a long poem, telling the story of the War of the Last Alliance, at least to the point where Gil-galad aided in the overthrow of Sauron, and was himself slain.

Bilbo Baggins later translated it into the Common Tongue, and taught it to Samwise Gamgee in his youth, who mistakenly thought that Bilbo was the composer.

Sam narrated the three introductory stanzas while approaching Weathertop, but he did not recall the following verses, which were "all about Mordor". Aragorn and Frodo knew more of the text.[1]

Gil-galad was an elven-king.
Of him the harpers sadly sing;
the last whose realm was fair and free
between the Mountains and the Sea.

His sword was long, his lance was keen.
His shining helm afar was seen;
the countless stars of heaven's field
were mirrored in his silver shield.

But long ago he rode away,
and where he dwelleth none can say;
for into darkness fell his star
in Mordor where the shadows are.

Sam sang the song during his trip to Rivendell.