Ereinion Gil-galad was the sixth and last High King of the Noldor.

The exact date and place of Gil-galad's birth is not known.

He was still a child at the time of the Dagor Bragollach when Morgoth broke the Siege of Angband. As a result, his father[note 1] sent him (and his mother) to Círdan at the Havens of the Falas for safekeeping.[2] After the fall of Minas Tirith, the Pass of Sirion was open to Morgoth's hosts, although they were still kept at bay by the still mighty realm of Hithlum and also the power of Nargothrond. Hithlum was destroyed after the Nirnaeth Arnoediad and thus there was no power left that could withstand the enemies, and the ports at the Falas were besieged and captured. Yet Círdan, Gil-galad, and many other Elves could flee from death on ship and established a refuge upon the Isle of Balar and a small haven at the Mouths of Sirion.[3]

In the Nirnaeth Arnoediad, Fingon, High King of the Noldor, was slain, and the crown passed to his brother Turgon in Gondolin. When Gondolin was lost, Gil-galad received the Kingship of the Noldor.[4] He and Círdan maintained the refuge upon Balar and the small port at the Sirion estuary until the War of Wrath and the end of the First Age.

After the destruction of Beleriand during the War of Wrath, Gil-galad founded a kingdom in Lindon in the far north-west of Middle-earth, roughly between the Blue Mountains and the Great Sea around the Gulf of Lhûn and the havens of Forlond, Harlond, and Mithlond were founded.[5] Gil-galad was the last heir of the kings of the Noldor in exile, and acknowledged as High King of the Elves of the West.[6] Many Elves, both the Sindar and the Noldor joined him. But soon, there was again unrest among the Noldor, and many of them left Lindon. Led by Celebrimbor, grandson of Fëanor, founded the realm of Eregion, probably also stirred up by the finding of mithril in Khazad-dûm. Also, some of the Sindar and many of the Nandor did not wish to live with the Noldor, who had done them a great evil, and migrated eastwards to Lothlórien or Greenwood the Great.

When Prince Aldarion of Númenor came to Middle-earth, they established friendship with the Elves. In S.A. 882 Gil-galad gave him a letter for his father, the King of Númenor, Tar-Meneldur. He warned him that a new shadow had arisen in the East and besought him for aid.[7] 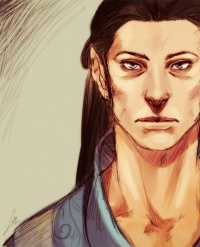 Around the year 1000 of the Second Age, Sauron tried to make contact with the Elves under the name of Annatar, the "Lord of Gifts", but Gil-galad and Círdan did not trust him and rejected his proposals. However, Sauron was welcomed in Eregion and the Rings of Power were forged.[5] Around S.A. 1600 Sauron forged the One Ring in secret, and when the Elves of Eregion found out that they were betrayed, Sauron demanded the Rings, and when they refused, in S.A. 1693 the War of the Elves and Sauron began.[8][6] Celebrimbor had rescued the Three Rings of the Elves in time, sending Vilya and Narya to Gil-galad and Círdan in Lindon, respectively, while the third ring Nenya was given to Galadriel.[9]

As Sauron invaded Eriador, Gil-galad sent Elrond to aid Eregion and also called on Númenor for aid.[10][6] Elrond was unable to avert Sauron, and with some survivors, they retreated to Imladris.[9]

Eriador was being overrun until a great fleet of the Númenóreans sent by Tar-Minastir arrived at Lindon. With united forces, Sauron's army was driven back and defeated.[6][9] After this war, the Elves were not further troubled by Sauron for a long time, and Gil-galad passed the ring Vilya to Elrond and he appointed Elrond as his vice-regent.[9].

When Tar-Calion captured Sauron and took him to Númenor, the Westlands found peace, and Gil-galad was free to extend his power to the north, south, and east beyond the Anduin.[5]

After the Downfall of Númenor, Elendil and his sons came to Middle-earth and founded the realms of Gondor in the south and Arnor in the north. Gondor was soon attacked by Sauron and Elendil's son Isildur had to flee, and sailed north to his father. Elendil and Gil-galad then formed the Last Alliance of Elves and Men against Sauron.[6] 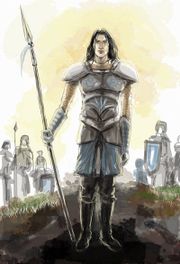 In the following years, the Allies marched to Imladris, crossed the Misty Mountains, and marched south, where they defeated a great army outside Mordor. They broke through Cirith Gorgor and besieged Sauron's Dark Tower.[6] Gil-galad fought with his long sword and his spear Aeglos that was much feared by the enemy.[11][12]

When the siege had lasted for seven years, it became so pressing that Sauron himself sallied forth. By his power, the siege was broken, and his army advanced to the slopes of Orodruin. There he was engaged by Elendil and Gil-galad in a single combat. Sauron was defeated but both Gil-galad and Elendil were killed in the act.[6] In the Scroll he wrote in Minas Tirith before riding north, Isildur wrote that Gil-galad was killed by the heat of Sauron's hand.[13]

According to a version, this name was an epessë given to him because his armour and shield were overlaid with silver and included a device of white stars, so they shone in the distance like a star.[15] A later version explains it was his mother-name.[1]

Gil-galad already appears in The Etymologies as Noldorin for "Starlight".[16]

As a descendant of kings, the Sindarin birth name of Gil-galad was Ereinion ("Scion of Kings"), from plural aran ("king") + -ion (patronymic suffix).[17]

Gil-galad's Quenya name was Artanáro, or in Sindarin Rodnor.[1] Paul Strack explains it can be translated as "Noble Fire".[18]

An unclear name is Finellach, included in Gil-galad's letter to Tar-Meneldur (but omitted by Christopher Tolkien).[1] David Salo explains it can mean "Flame of Hair and Eye".[19]

Gil-galad appears for the first time in the second version of The Fall of Númenor (written c. 1937), along with Elendil (in the previous conception, Elrond is the leader of the Elves who remained behind). Both create a great league of Elves and Men and fight Thû in Mordor, but both are slain by him. In that text he is mentioned as a descendant of Fëanor and an Elven king of Beleriand.[20]

In a marginal note of §28 of the conclusion of Quenta Silmarillion, Tolkien pencilled the names Gilgalad and Lindon.[21] This note was probably used by Christopher Tolkien to introduce Gil-Galad at the end of chapter 24 of the published Silmarillion, beside Círdan, Celeborn, and Galadriel.[22]

Later, and through the writing of The Lord of the Rings, he was considered a son of Finrod Felagund, until Tolkien decided that Felagund was unmarried and childless.[23]

A marginal note by Tolkien from around this time (the late 1950s) suggested that Gil-galad might be the son of Fingon. This suggestion was taken up by Tolkien's son and literary executor Christopher Tolkien in the published version of The Silmarillion, which states that Gil-galad is the son of Fingon. He also edited a line in Aldarion and Erendis: The Mariner's Wife which originally referred to Gil-galad as a member of the House of Finarfin to make it consistent with the published Silmarillion. Christopher stated many years later in The Peoples of Middle-earth that this decision to make Gil-galad a son of Fingon was an editorial mistake on his part and did not represent his father's conception of the character. Christopher suggested that it would have been better to have left Gil-galad's parentage obscure.[1]

Tolkien's final decision for Gil-galad's parentage appears to have been that he was a son of Orodreth, who was at the same time changed from being a son of Finarfin to a son of Angrod.[1] This conception, however, was never incorporated into the written stories of The Silmarillion, and aspects of it — notably the downgrading of Orodreth into a son of Angrod — would have required considerable reworking of the existing text.

Gil-galad's descent from Fingon may have been abandoned due to its problematic implications for the right of Turgon to the High Kingship. Except for the remarkable and well-documented case of the Dispossession of the House of Fëanor, the High Kingship passed from one holder to the next with preference given to the sons of the latest King in birth order before the younger brothers of the latest King in birth order.[3]

As such, Turgon taking the High Kingship after the death of Fingon in F.A. 472 with Fingon's son Gil-galad already more than 17 years old would represent either a criminal usurpation or a remarkable and noteworthy violation of the principle of patrilineal primogeniture[24] that describes all previous inheritances of the High Kingship. Tolkien did not portray Turgon's succession as unjust or exceptional in any extant writings,[4] so it is unlikely that he intended Turgon's succession to be anomalous in such a way.

In the prologue, Gil-galad is shown as one of the bearers of the three Elven rings. Later, he is present at the Battle of the Last Alliance of Elves and Men wielding his spear Aeglos. His death is not shown, and he does not take down Sauron. He is played by Mark Ferguson.
The bodies of Gil-galad and Elendil can be seen on the mural depicting the Siege in the House of Elrond.