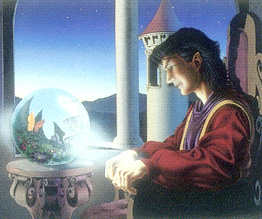 The stone was aligned westwards towards the Master-stone in the Tower of Avallonë, along the length of the Straight Road; because of this, it could not communicate with the other six of Middle-earth. Only Elendil was able to use it to look west across the Sea and see the Undying Lands;[1] but he could not see Númenor for it was covered by the bent seas for ever.[2]

It was stored in the tower Elostirion, Emyn Beraid and after Elendil's death the Elves took it under their care and no Man used it again.[3]

Even after the fall of Arnor, Wandering Companies of Elves made pilgrimages to visit the Towers and see the Stone, in order to catch a glimpse of Varda. One such company, led by Gildor Inglorion just returning from Elostirion, was encountered by Frodo, Sam and Pippin on September 24, T.A. 3018.[4]

It remained in its tower until the end of the Third Age; it was then removed by Cirdan, placed on the White Ship and taken back into the West.[2]