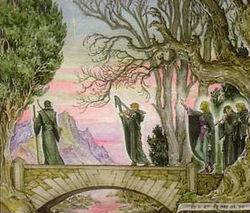 "For the Elves of the High Kindred had not yet forsaken Middle-earth, and they dwelt still at that time at the Grey Havens away to the west, and in other places within reach of the Shire."
― The Lord of the Rings, "Prologue: Concerning Hobbits"

In the First and Second Age the people of Eriador included Nandor from Rhovanion, who came west but never passed the Blue Mountains to join their brethren. In the Second Age some of these Nandor were nomadic "wandering companies", and they acknowledged Celeborn and Galadriel as "Lord and Lady of the Eldar in Eriador", ruling from Nenuial.[1]

In later ages wandering companies set out from Rivendell to various destinations, such as the Tower Hills.[2]

The Hobbits had contact with Elves around Eriador, and the Fallohides were friendlier to them than other Hobbits. Along with Dwarves, they were a source of news from the outside world. It is possible that the Shire-hobbits learned the art of building directly from them. However as time passed in the Shire, they had less contact with the Elves, growing some fear about them, and distrust for those that had dealings with them, coupled with their fear of the Sea.[3]

Bilbo Baggins, and later Frodo Baggins were often wandering far from home, in the hills and woods at night, and they were suspected meeting Elves who seldom walked in the Shire.[4] Indeed some Elves like Gildor Inglorion had seen them many times while journeying, although the hobbits did not notice them.[5] In the years leading to the War of the Ring, some Elves of Lindon traversed the Shire in Spring and Autumn,[5] while others passed on their way to the Grey Havens, leaving Middle-earth.[4]

One such Wandering Company, led by Gildor Inglorion, having gazed in the Palantír of the White Towers, seeking a glimpse of Elbereth, were returning to Rivendell. On 24 September T.A. 3018, their chants drove away a Ringwraith, and soon were encountered by Frodo, Samwise Gamgee and Peregrin Took.

Gildor promised to inform other Wandering Companies of Frodo's journey, so that those who could, should help him.[5]

During their wandering the Elves were silent and could move unseen, and seldom took other travellers with them.

At nights they camped in places around Eriador. One such place was a hill in Woody End, above Woodhall (eighteen miles west of the Bucklebury Ferry[6]); a greensward and a natural opening like a "hall" formed by the trees as pillars. They sang watching the stars rising, especially Menelvagor, which was a sign for merriment. Then they lit a wood-fire, and torches with lights of gold and silver set upon the trees, and feasted sitting on the grass or old sawn trunks. They shared cool gold-coloured and fragrant draughts; and dishes heaped with food, more than a hobbit's birthday feast (although just a small fare compared to how they treated guests in their halls), and fruits sweeter and richer than those of the Shire gardens.[5] They rested on fragrant beds made of fern and grass, set on bowers made by laced tree-branches.[6]

A scene that was shot on the third day of principal photography, "The Passing of the Elves", is a reference to this passage in the book although no interaction is made between the hobbits and the Elves. It was eventually cut from the theatrical release to postpone the introduction of Elves to Rivendell.[7] In the scene, Frodo and Sam have a meal when Frodo notices Elves in the distance, which according to Frodo are "Wood-elves" who travel to the Grey Havens and leave Middle-earth.[8] They overhear the Elves singing a sad song, which is in fact a translation into Sindarin of Tolkien's Elven Hymn to Elbereth.[9] Jackson meant for this scene to invoke the sadness of the Elves leaving Middle-earth.[7]

Persuaded by Elrond to forget Aragorn, Arwen joins a band of Elves on her way to the Gray Havens. "Figwit" or Lindir is with her. She has a foresight about her marriage with Aragorn and their son Eldarion and leaves the Company to return to Rivendell, leaving "Figwit" surprised.