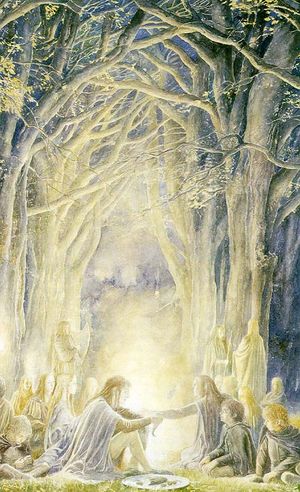 Feasting with the Elves by Alan Lee

In September T.A. 3018, he led a Wandering Company of Elves of Rivendell travelling eastwards from the Emyn Beraid, where they went to see Elbereth in the palantír that was kept there. On the 24th, they were singing, and unknown to him their sounds drove away a Black Rider who was searching for Frodo Baggins, Samwise Gamgee and Peregrin Took on the road near the Woody End. As they passed by them, Gildor was the hindmost, and seeing Frodo he greeted him, to his surprise. Gildor initially intended that the elves bid the hobbits farewell and continue on their way, until Pippin spoke of the Black Riders pursuing them. Upon hearing this, he invited the hobbits to join them, although it was not their custom. He rejoiced after hearing Frodo's Quenya greeting and gave him the title Elf-friend.

At night they camped on a hill above Woodhall; they ate and sang, and Gildor discussed the peril that haunted the three hobbits. He sensed Frodo's fears and uncertainties about his travel to Rivendell, and was worried hearing that Gandalf had not returned as he had promised to Frodo. When Frodo asked whether he ought to wait for Gandalf, Gildor replied that the choice was Frodo's, but if he demanded counsel, then Gildor advised him not to wait but to follow Gandalf's plans, with trusty companions. However, he refused to tell him more of the nature of the mysterious Black Riders, except that they were agents of the Enemy, and deadly.[1]

Two years later, on 22 September T.A. 3021, he met the hobbits once again. He accompanied a riding of great Lords and Ladies, that planned to sail West on board the White Ship[8] and probably he was among the Elves who sailed to the West.[9][note 1]

The same applies to Inglorion, which means "Son of Inglor", from -ion ("son of"), leading to the genealogical discussion explained below.

It should be noted that Tolkien initially used names from his (unpublished) The Silmarillion writings rather at random in The Hobbit and the first drafts of the sequel which would become The Lord of the Rings: other examples are the mention of Gondolin and the appearance of Elrond in The Hobbit, which were only later brought into alignment with The Lord of the Rings and the unpublished mythology by a third edition of the book.[11] This may be the case of the reference to the name "Finrod".

This all suggests that, while Gildor might have been initially intended to be Felagund's son, in the final version he may have been a member of the House of Finrod as some other descendant, or servant, not one of Finrod's sons — perhaps one of the knights of Nargothrond.

Gildor is played by Charles Wirths.

Gildor makes a brief appearance in the Hobbit introduction to the Shadows of Angmar driving out a Black Rider in the Shire. He also appears in the hobbit village of Tighfield, interacting with the village's children.
Later he is also the representative for the elves for the Council of the North in the third book to the Shadows of Angmar: "The Council of the North". Besides the epic story line, players can find him in the Elven refuge Lin Giliath near Esteldín in the North Downs.