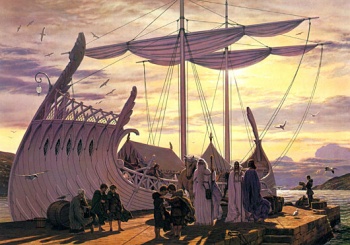 "In the twilight of autumn it sailed out of Mithlond, until the seas of the Bent World fell away beneath it…"
― The Silmarillion, Of the Rings of Power and the Third Age

The White Ship was the ship that sailed from the Grey Havens into the Uttermost West, carrying the Ring-bearers to Aman. Its departure on 29 September T.A. 3021 marked the end of the Third Age.[1] Along with Frodo Baggins the Ring-bearer and Bilbo Baggins the Ring-finder the ship also carried Elrond, Galadriel, and Gandalf, who had been the Keepers of the Three Rings. They were accompanied to the Grey Havens by Gildor Inglorion and many other Elves besides, but whether any of these others went aboard the ship with them is not told.[2] It does seem, though, that Gandalf's horse Shadowfax did make the journey for he was waiting at the quayside[3]. The White Ship was one of the last ships to have set sail from the Grey Havens.

In the film, Frodo's narration claims that the White Ship is "the last ship to leave Middle-earth," despite it being separate from the later Last Ship in the book.