"King Finrod Felagund, fairest and most beloved of the house of Finwë."
― Quenta Silmarillion, "Of Beren and Lúthien"

Finrod was an Elven king of the Noldor, eldest son of Finarfin and older brother to Angrod, Aegnor and Galadriel. Finrod was like his father in his fair face and golden hair, and also in his noble and generous heart.

In Beleriand, Finrod became the ruler of Nargothrond, taking the after-name of Felagund. He was a wise, just and powerful Elf, and a great traveller.[1]

Finrod was born in Eldamar in the Year of the Trees 1300, the same as his cousin Turgon.[2] They were friends, and his beloved was Amarië of the Vanyar.

Finrod was among those who opposed Fëanor and the Exile of the Noldor. However, when the Noldor were set to depart from Aman, he joined them, for he would not be sundered from his friends and his people who were eager to go. Also, he had no wish to abandon his people to Fëanor's rule.[3]

[edit] Return of the Noldor

Finrod, along with his father, led the rear of the host along with many of the noblest and wisest of the Noldor; and often they looked behind them to see their fair city, especially Finrod, for he had to leave Amarië behind. With him, he brought along many treasures from Tirion,[4] including his Ring.[5]

Finrod and his people did not participate in the Kinslaying at Alqualondë. While they were travelling up the coast of Araman, the Vala Mandos appeared and pronounced the Doom of the Noldor, and in that hour, Finarfin forsook the march and returned to Valinor with many of his people. However, Finrod and his siblings went forward still and led their people on the long and perilous march to Middle-earth.

After their victory in the Dagor-nuin-Giliath, the Noldor started building their numerous realms. Finrod established the tower of Minas Tirith on the island of Tol Sirion. Once, while journeying southward along the river Sirion, Finrod and his friend Turgon encamped upon its banks. Ulmo, coming up the river, laid a deep sleep upon them and heavy dreams; and it seemed to each that he was bidden to prepare for a day of evil, and to establish a retreat, lest Morgoth should burst from Angband and overthrow the armies of the North.

Now on a time Finrod and his sister Galadriel were guests of King Elu Thingol, their kinsman in Doriath. There, Finrod told Thingol of his admiration for the halls of Menegroth; and Thingol spoke to him of the deep gorge of the river Narog and told him about the caves under the High Faroth in its deep western shore. Thus Finrod came to the Caverns of Narog and established there deep halls and armouries; and that stronghold was called Nargothrond. In this he was aided by the Dwarves of the Blue Mountains, and Finrod rewarded them with many jewels from Valinor. In that time, the Nauglamír was made for him, the Necklace of the Dwarves. After Nargothrond was made, Finrod committed Minas Tirith to the keeping of Orodreth, his nephew, and was referred to by the additional name of Felagund, an honorific title given him by the Dwarves, meaning a "Maker of Caves".

The realm of Nargothrond extended to the sea, excluding the Falas. Finrod was a friend and ally of Círdan, and had also built the tower Barad Nimras upon the cape.[6]

Finrod, Beor and the Green-elves of Ossiriand by Steamy

When over three hundred years had passed since the Noldor came to Beleriand, Finrod journeyed east of Sirion and went hunting with Maglor and Maedhros, two of the sons of Fëanor. But he wearied of the hunt and passed on alone towards the mountains of Ered Lindon. There, in the lands of Thargelion, in East Beleriand, Finrod was the first of the Noldor to come across Men. These were the kindred and followers of Bëor The Old. He went among them while they were sleeping and, picking up a harp which Bëor had laid aside, played music upon it such as the ears of men had not heard. When the men awoke and listened to his song, each thought that he was in some fair dream. He long stayed with them, learning their language and teaching them Sindarin. He also intervened on behalf of the Laiquendi of Ossiriand, who feared Men would destroy their home, and he got permission of Thingol, who held rule over all Beleriand, to guide the Men to Estolad.[7]

Finrod participated in the Dagor Bragollach, fighting in the Fen of Serech, when he was surrounded by Orcs. It was Barahir of the House of Bëor who saved his life, and Finrod swore an oath of abiding friendship and aid in every need to Barahir and all his kin. As a token he gave Barahir his ring, which became known as the Ring of Barahir.[8]

When, ten years later, Barahir's son Beren came to Nargothrond seeking help, Finrod went with him on the Quest for the Silmaril to repay his debt. Celegorm and Curufin, who were living in Nargothrond at the time, persuaded (using barely veiled threats related to their Oath) most of Nargothrond to stay behind. Only ten warriors, headed by one Edrahil, were faithful and came with them. Beneath the Shadowy Mountains they came upon a company of Orcs, and slew them all in their camp. They took their gear and weapons, and by the magic of Finrod, their own forms and faces were changed to the likeness of Orcs. Thus disguised, they came far upon their northward road between Ered Wethrin and the highlands of Taur-nu-Fuin. However, the twelve were captured and imprisoned by Sauron on Tol-in-Gaurhoth ("Isle of Werewolves").[5] 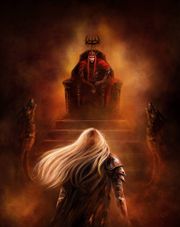 And Finrod fell before the Throne by Kurai Geijutsu

Thus befell the contest of Finrod and Sauron. Finrod strove with Sauron in songs of power, and the power of the Elven King was very great. But in the end, Sauron had the mastery. It is told in the Lay of Leithian:

Then Sauron stripped from them their disguise, but though their kinds were revealed, he could not discover their names or their purposes.

Sauron imprisoned them and one by one they were killed by werewolves until only Beren and Felagund were left, but none of the companions betrayed them. When the werewolf came to kill Beren, Felagund put forth all his power and burst his bonds. He wrestled with the werewolf, and slew it with his hands and teeth. Yet he himself was mortally wounded, and he died in the dark, in Tol-in-Gaurhoth, whose great tower he himself had built. Thus King Finrod Felagund, the fairest and most beloved of the house of Finwë, redeemed his oath. 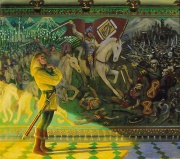 An Elf loremaster ponders at a mural of Finrod leading his House in battle. Art by Donato Giancola

Because of Finrod's noble actions in life, and his reluctance to journey to Middle-earth, he was reincarnated after only a short time. He and Glorfindel were the only elves who were known to have been reincarnated. It is noted in the Lay of Leithian that Finrod was soon allowed to return to life in Valinor, and "now dwells with Amarië.”[source?] It is also noted in The Silmarillion that "Finrod walks with Finarfin his father beneath the trees in Eldamar".[5]

The name Finrod is the Sindarin form of his father-name Findaráto ("[Golden-]Haired Champion"). It is possible he and his brother Angrod were first called Aráto, and later differentiated adding find-, referred to the golden hair derived from Indis. This name was of Telerin origin, so the proper Quenya form would be Artafindë.[9]:346-347

Felagund was an epessë given to him by the Dwarves that expanded the caves of Nargothrond, and meant "Hewer of Caves". It is not Sindarin, but rather Sindarinized Khuzdul, from Felakgundu. The name was Eldarized by other as Felagon (in relation with Fingon, Turgon).[10]

While revising his Elvish languages in later years, Tolkien reinterpreted Felagund as "den-dweller, brock, badger", from Sindarin fela, wich was used for dens made by wild animals or temporary dwellings of wandering folks, unrelated to big carved caves. The west bank of Narog had many dens of badgers, some of them occupied by Petty-dwarves. It was thus probable that Felagund was actually given by the Sons of Fëanor as a mockery to Finrod, and transmitted by the Dwarves.[11]

His mother-name was Ingoldo, which was also the mother-name of his father Finarfin. It meant "the Ñoldo", 'one-eminent of the kindred' which is in simpler words 'the wise'. It was a name used by his brothers and sister, who loved him.[9]:346, 360

Finrod was also called Nóm ("Wisdom") by Bëor and his people.[7] His other titles include "the Faithful", "the Friend of Men", "King of Nargothrond", "Lord of Nargothrond".[13][14]

He was often called by the Eldar Edennil or Atandil, which means "Friend of Men" in Sindarin and Quenya respectively.[15] A variant for Atandil was Firindil.[16]

In earlier versions of the Middle-earth myths, and when The Lord of the Rings was published, the name Finrod was given to the character later known as Finarfin. Finrod Felagund was then named Inglor Felagund. However, that changed in later drafts, and the character who had the name Gildor Inglorion, in The Lord of the Rings, was unrelated to Finrod despite having a name that means Gildor son of Inglor. Finrod was childless and unmarried during the events of The Silmarillion because his lover, Amarië, remained in Valinor.[17]