"Turgon, Turgon! Remember the Fen of Serech!"
― Húrin, in The Wanderings of Húrin

The Fen of Serech was a marshland between Dorthonion and the Ered Wethrin, at the confluence of the Sirion and its tributary, the Rivil. It lay at the north-east end of the Pass of Sirion which connected Anfauglith and (West) Beleriand[1] and thus was the site of many battles.

During the Dagor-nuin-Giliath, the returning Noldor swiftly overcame the Orcs that had been sent against them and hunted them over the mountains. In the meantime another Orc army that had beleaguered Círdan rushed up the Vales of Sirion to their aid, but they were attacked by Celegorm as he led part of the Elven-host down from the hills around Eithel Sirion. Celegorm drove the Orcs into the Fen of Serech where most of them perished.[2] 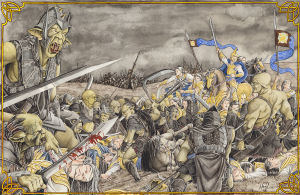 Aid on the Fens by Henning Janssen

In F.A. 455 the Dagor Bragollach began[3] with rivers of flame from Thangorodrim. In the onslaught, Finrod Felagund was cut off from all of his forces except for a small company in the Fen. Barahir saved the king by rushing in and creating a wall of spears about him, which enabled Finrod to escape back to Nargothrond. Barahir's losses were heavy, but his deed forged a great friendship between Finrod and the kin of Barahir. Finrod gave Barahir his ring in token of his vow of friendship.[4]

In the fifth battle of Beleriand, the Nirnaeth Arnoediad (fought in F.A. 472[5]), King Fingon had hidden his forces in the eastern hills of the Ered Wethrin and the fortress of Barad Eithel. The Captain of Morgoth marched his battle-line forward until it was between the Fen and the fortress. Before the outworks of Barad Eithel the heralds of Morgoth placed Gelmir of Nargothrond and cut off his hands and feet and head. Gelmir's brother Gwindor pursued the heralds beyond the Fen of Serech and slew them, which caused the entire Elven host to charge in and slaughter Morgoth's western forces.

However, this seeming victory led to disaster. Fingon's host reached the gates of Thangorodrim where Morgoth released his main host. Fingon retreated and was saved by Turgon and Húrin when surrounded, but their combined forces still had to withdraw when Glaurung appeared and fell upon Maedhros' eastern forces. Turgon and the host of Gondolin were forced back across the Fen by the coming of Gothmog, Lord of the Balrogs. Húrin and Huor, with the remaining men of the House of Hador, made a stand upon the banks of the Rivil, which allowed Turgon to escape to Gondolin. Huor and his men were slain one by one by the Orcs, but Húrin slayed seventy of the enemy before being captured.[6]

In F.A. 500, Morgoth released Húrin and set a watch upon him. After visiting Hithlum Húrin sought to enter the hidden city of Gondolin. When Thorondor the eagle reported Húrin's presence below the Echoriath Turgon suspected that Húrin had surrendered to Morgoth and refused to aid him. Despairing before the silent cliffs, Húrin shouted: "Turgon, Turgon, remember the Fen of Serech!"[7]

Serech is clearly a Sindarin word, but its meaning is unclear,[8] although it could be related with the word sereg ("blood").