"Here not long since was the Great Worm of Angband, most fell of all the creatures of the Enemy!"
― Voronwë in Of Tuor and his Coming to Gondolin

Glaurung was the first of the dragons[1] and one of the foremost lieutenants of Morgoth during the First Age. He had four legs, and a fiery breath, but no wings and could not fly. He was sentient and could talk and understand speech. 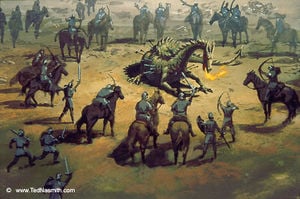 Glaurung is Humbled by Ted Nasmith

Exactly when Glaurung was created is not known, but he first emerged from Angband in F.A. 260,[2] during the Siege of Angband. Although he was still young according to the long life of Dragons, and not grown to his full strength, his initial assault pushed the Noldor from Ard-galen, which he took and defiled, to Dorthonion and the Ered Wethrin.

This victory was short-lived, however, and Glaurung was forced back to Angband when Fingon rode against him with a company of mounted archers. Morgoth was not pleased that Glaurung had revealed himself while still immature, and did not allow any more forays from Angband for some two hundred years.[3]

The strength and terror of the Great Worm were now great indeed, and Elves and Men withered before him; and he came between the hosts of Maedhros and Fingon and swept them apart.
—Quenta Silmarillion, "Of the Fifth Battle: Nirnaeth Arnoediad"

In autumn of F.A. 495,[8] Glaurung led an army of Orcs against Nargothrond. He passed over Anfauglith and first assailed the north Vales of Sirion, then coming south laid waste to Eithel Ivrin and Talath Dirnen. His advance was checked by the Mormegil, Túrin Turambar, who led the forces of Nargothrond out to meet Glaurung in the Battle of Tumhalad. The Elves were utterly defeated; King Orodreth was slain, and although Túrin attempted to rally the survivors to a last defence of Nargothrond itself, Glaurung came there first. The dragon passed swiftly over the bridge over Narog and destroyed the Doors of Felagund.[9] 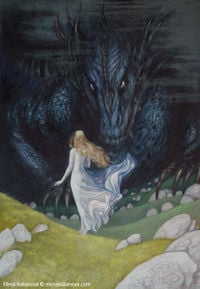 As Glaurung's orcs were sacking the city, Túrin arrived and cut his way to the captives. As he did so Glaurung emerged from the doors and put him under his spell. Túrin was transfixed by the gaze of dragon as the captives, among them Finduilas, were led away. Then Glaurung spoke to Túrin and convinced him not to go after Finduilas but to return to Dor-lómin and rescue his mother Morwen and sister Nienor (when in fact they had already fled to Doriath). After weaving the first strand of his plot to bring doom to the children of Húrin, who Morgoth had cursed, he drove away his orcs and made his abode in Nargothrond, casting down the bridge and, in true dragon fashion, laying down to sleep on the great hoard he had plundered.[9]

The following year, F.A. 496,[10] Glaurung's slumber was disturbed. Hearing of the fall of Nargothrond a small party from Doriath, including Morwen and Nienor, was sent to seek tidings, especially of the fate of Túrin. His keen sight quickly detected them and, as they approached his dwelling, he issued forth into the Narog and created a steam and reek that scattered the spies in confusion. Glaurung then crept swiftly towards Amon Ethir where he met Nienor, alone, and placed her under the same spell he had her brother Túrin. But this time rather than subtle deceits he used his power to completely obliterate Niënor's memory and left her to wander in the wild.[11] 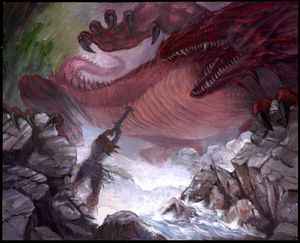 The Slaying of Glaurung by Guy Gondron

For the next several years Glaurung ruled as the 'dragon-king' of what was once the Realm of Nargothrond, gathering many Orcs to him.[12] Meanwhile, Nienor escaped from Mablung's care and wandered into Brethil. There she was found by Túrin, now living amongst the Halethrim, who named her Níniel. Not knowing that they were brother and sister (Túrin having never met his sister and Níniel ignorant of her true identity), the two fell in love and were married.[11][13] In F.A. 498 Glaurung began to send his orcs against Brethil, and thereby forced Túrin to reveal himself.[14] The next summer[15] he came there himself, but was caught by an ambush before he could reach the Halethrim's dwellings at Ephel Brandir: Túrin lay in wait in the gorge of Cabed-en-Aras, and as Glaurung attempted to leap over it he was dealt a mortal blow by Gurthang, Túrin's black sword.[16]

However even as he lay dying on the banks of Teiglin, the Deceiver completed the doom he had woven for the children of Húrin. Túrin was rendered unconscious by Glaurung's noxious blood and Níniel, coming upon the scene, thought him dead. With his last breath the dragon revealed his plot, and as he died his spells were undone, so Nienor Níniel regained her memory. In despair she leapt to her death into Cabed-en-Aras, and when Túrin awoke and also learned the truth from Brandir, he cast himself upon his own sword.[16][17]

[Morgoth] loosed upon his foes the last desperate assault that he had prepared, and out of the pits of Angband there issued the winged dragons, that had not before been seen
—Quenta Silmarillion, "Of the Voyage of Eärendil and the War of Wrath"

The name Glaurung is in Sindarin. According to Eldamo, the first element of the name is glaur ("gold"), but the meaning of the second element is unclear.[19] However, there it is still glossed as "Gold-worm".[19]

Glórund sets forth to seek Turin by J.R.R. Tolkien

As the first and greatest of the dragons of Morgoth, Glaurung was sometimes referred to as the Great Worm,[7][12] the Worm of Morgoth,[16] the Great Worm of Angband[20] and the Gold-worm of Angband.[21] He bore the epithet the Golden.[5] He was also described as the Father of Dragons,[5] though whether this implies he actually sired the rest of his kind is uncertain.

In The Book of Lost Tales, Glórund was a "Foalókë".

The name Angruin was at one time proposed as an alternative name for Glaurung by Tolkien, however, it was ultimately rejected.[26] It is in Sindarin, and consists of the elements ang ("iron") and ruin ("fiery red").[27] It is glossed as "Iron Fire".[26][27]