He is first mentioned at the Dagor-nuin-Giliath when his Balrogs surrounded and attacked Fëanor, whom Gothmog himself mortally wounded, before they were forced to depart to Angband when the Sons of Fëanor came to their fathers aid.[1]

He next appeared at the Nirnaeth Arnoediad where he was named high-captain of Angband, signifying his status as one of Morgoth's most important Lieutenants (Sauron, another Maia, played a more domestic role compared to Gothmog’s front-line role). There at the Nirnaeth Arnoediad he slew Fingon, thus allowing him to boast of having slain two of the five High Kings of the Noldor.[2] During this same battle he captured Húrin Thalion alive by the command of Morgoth, although this order allowed Húrin to slaughter many of Gothmog's troll-guards he was eventually captured, bound and dragged to Angband by Gothmog.[3]:59

His final appearance was as the marshal of the hosts at the Fall of Gondolin, where he slew, and was slain by, Ecthelion in the square of the King.[4] 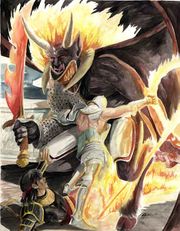