Durin's Bane was one of the Balrogs, otherwise unnamed. He was notable for surviving the War of Wrath. After sleeping deep within the Misty Mountains for thousands of years, he was awoken by the Dwarves of Moria in the Third Age, responsible for the death of King Durin VI and the ruin of Moria; it was the Balrog encountered by the Fellowship of the Ring.

This Balrog was first created as a Maia, but like other evil spirits followed Morgoth to Arda soon after its creation, contending with Manwë.[2]

It is not known to which Battles of Beleriand this Balrog fought until the end of the First Age, and whether he served under Gothmog, the Lord of Balrogs. When the Host of the Valar defeated the hosts of Morgoth in the War of Wrath, this Balrog managed to flee the overthrow of Thangorodrim and to escape into the east and hide in the roots of the Misty Mountains beneath Khazad-dûm.[3][4]

Awakening and the Third Age[edit] 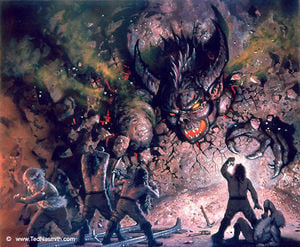 For more than five millennia, the Balrog hibernated in his deep hiding place at the roots of the mountains in Khazad-dûm. He remained undisturbed throughout the Second Age and most of the Third, before the mithril-miners of dwarf-King Durin VI awoke him in T.A. 1980.[5] Durin was slain by the creature, at which point he became known as Durin's Bane.[3]

The Dwarves attempted to fight the Durin's Bane, but his power was far too great. Despite their efforts to hold Khazad-dûm against it, King Náin and many of the Dwarves were killed in T.A. 1981[6] and the survivors were forced to flee.[3] Orcs were able to creep into Moria.[7] As a result, many of the Silvan Elves of Lothlórien fled to the south.[6]

For five hundred years, Moria was left to the Balrog.[8] He was acquainted to the ancient tunnels delved by mysterious nameless things underneath Moria and the Mountains.[9]

Around T.A. 2480, Orcs began to make secret strongholds in the Misty Mountains to block all of the passes. Sauron began to send some his creatures to Moria.[10] The Balrog allowed the Orcs and trolls to remain in Moria while he dwelt there, but they doubtlessly feared him.[1][note 1]

The Battle of Azanulbizar was the climatic battle in the War of the Dwarves and Orcs. It took place before the Great Gate of Moria in 2799 and was a victory for the Dwarves. However, the victors did not conquer Moria because Dáin Ironfoot, having slain the Orc Azog, felt the terror of the Balrog at the gate.[11] Despite a failed attempt to recolonize Moria by Balin in 2989,[12] Durin's Bane remained a menace in the ancient kingdom of the Dwarves whose nature was hidden to the outside world. 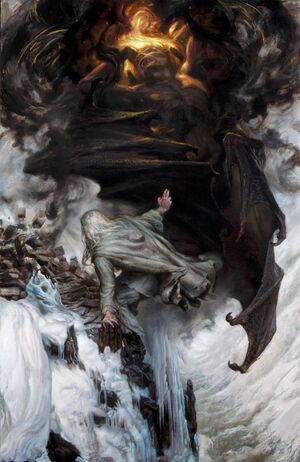 In January of 3019, the Fellowship of the Ring travelled through Moria on the way to Mount Doom, reaching the Bridge of Khazad-dûm in 15 January.[8] There they encountered the terrible creature: the Elf Legolas instantly recognized it was a Balrog, while Gimli dropped his axe in awe, recognizing Durin's Bane. At once, the Wizard Gandalf warned to the members of the Fellowship that this creature was beyond them, commanding them to leave while he faced it.[1]

Staying firmly in the narrow bridge, Gandalf cried at the Balrog, which remained silent. The creature's fire dimmed and darkness spread around it, while Gandalf's light stood. The Balrog struck, but Glamdring, Gandalf's sword, prevailed and the creature's sword was broken. Then the Balrog jumped ahead and Gandalf broke the Bridge in front of him, but as the Balrog fell he wrapped his whip around Gandalf's knees, which dragged him to the brink. Gandalf staggered and fell, sliding into the abyss, crying "Fly, you fools!" and was gone.[1] Neither he nor the Balrog were killed by the fall, and Gandalf pursued the creature for eight days until they climbed to the peak of Zirakzigil. Here they fought for three days and two nights. In the end, the Balrog was cast down and his body broke the mountain-side as it fell. Gandalf himself died following this ordeal, but was later sent back to Middle-earth with even greater powers as Gandalf the White.[9]

During the composition of The Lord of the Rings, in the first "Sketch of the Moria chapter", Tolkien conceived that the Fellowship was pursued by Orcs and a Black Rider, but soon wrote above it was a Balrog.[13]

In the first full narrative of the chapter, the description of the Balrog is more human-like, which Tolkien noted should be changed to be less clear: "A figure strode to the fissure, no more than man-high yet terror seemed to go before it. They could see the furnace-fire of its yellow eyes from afar; its arms were very long; it had a red [?tongue]. Through the air it sprang over the fiery fissure. The flames leaped up to greet it and wreathed about it. Its streaming hair seemed to catch fire...". Probably while being written, Tolkien also rejected a sentence of Gandalf's cry to the Balrog: "Go back into the fiery depths. It is forbidden for any Balrog to come beneath the sky since Fionwë son of Manwë overthrew Thangorodrim."[14]

Although it had no repercussion in any narrative, Tolkien considered in a hasty note that the battle on the Bridge was actually between Gandalf and Saruman, apparently resulting on Gandalf coming out clad in white.[15]

In the drafts of the "Lothlórien" chapter, Celeborn and Galadriel think that no Balrog could lie in the Misty Mountains, so it should have been sent by Sauron from Orodruin.[16]

The real name of Durin's Bane is given as "Askâdurs" and he is revealed to have fought against dwarves as part of Morgoth's armies during the First Age. He is encountered in various flashback instances (where the player controls historical characters), which showcase his awakening by dwarves in TA 1980, the fall of Khazad-dûm the year after and the dwarves of Balin's company fleeing from the ancient evil, among others. After Gandalf defeats him, the lifeless body of Durin's Bane can be found on the slopes of Zirakzigil. Despite the players knowing that the Balrog is dead, another Servant of Sauron tests their will and fears by portraying an illusion of him. In the illusion, the fight between Gandalf and the Balrog on the Endless Stair is recreated, until it ends the opposite way of the actual event: the Balrog defeats the Wizard, throwing his lifeless body from Zirakzigil. Players have to defeat the Balrog in order to combat the illusion.

Durin's Bane makes an appearance lurking beneath a large Mithril vein at the very depths of Khazad-dûm. When an orange leaf lands directly in front of him and catches on fire, disturbing his slumber, the Balrog roars. Whether this roar was out of anger or annoyance is not known.