The Lord of the Rings: The Third Age is a 2004 role-playing game (RPG) by EA for Xbox, GameCube, PlayStation 2, and Game Boy Advance. It was the first of Electronic Arts' spin-off games, followed by the more popular The Battle for Middle-earth series. It is a role-playing turn-based game; the characters can swap clothes, weapons, armors which they collect after fights or find in chests throughout their journey. 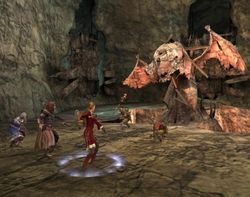 Actors were not credited by role, and most of the actors listed under "movie talent" (thus, actors from the movies) did not add original material.However,thre are some new actors who are credited for their role in the video game.