Osgiliath was the old capital city of Gondor. The city straddled the Anduin River at a point approximately half way between the cities of Minas Anor to the south-west and Minas Ithil to the north-east, and north of the nearby Emyn Arnen.

In the Great Hall of the city the thrones of the sons of Elendil were set side by side. In its days of glory, the city featured quays to handle sea-going vessels that came up from the sea, a great stone bridge supporting houses and towers of stone, and the Dome of Stars, which housed the Osgiliath-stone, the greatest of the seven Palantíri.[1]

Founded by Isildur and Anárion[1] near the end of the Second Age, Osgiliath was designated the capital of the southern Númenórean kingdom in exile, Gondor.

Soon after its founding, Sauron attacked and took Minas Ithil in S.A. 3429 and then moved westward. While Isildur sought aid from the north, Anárion defended the city.[2] When the army of the Last Alliance arrived and later defeated Sauron the threat to the city was lifted.[1] Thereafter, for over a thousand years, Osgiliath was the capital of Gondor, as well as its largest and most important city. 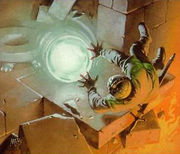 The beginning of the city's decline came in T.A. 1437 when it was sacked and burned, after a siege by the rebel Castamir's forces during the Kin-strife. It was during this siege that the Osgiliath-stone was lost in the River. The Great Plague of T.A. 1636 led to further depopulation with many victims, and some fled to the western dales or Ithilien; few returned and the city began to fall into ruin; the King's House was moved to the more secure Minas Anor in T.A. 1640.[3]

Over the next few hundred years, Gondor endured many military defeats east of the Anduin, especially the taking of Minas Ithil in T.A. 2002. Osgiliath became vulnerable to attack and was widely believed to be haunted, as its population continued to shrink. Osgiliath was finally abandoned by the remaining civilian population after being overrun by Uruk-hai in T.A. 2475, although the orcs were defeated by Steward Boromir.[3]

Over the following centuries, the western part of the ruined city was under the control of Gondor, and was at times provided with a military garrison as a means of defending the crossing of the Anduin. The eastern part, with Ithilien, was disputed territory, under Gondor's control for most of the rule of Denethor II, but in June of T.A. 3018 it was taken and occupied by Sauron's forces and its last bridge fell. This attack some later considered to be the beginning of the War of the Ring.[4]

In the following March, well into the War, Sauron launched a full-scale invasion of Gondor west of the Anduin, and despite the Rangers' defence of the western part of the city, Osgiliath quickly fell to Sauron's forces,[4] but it was reclaimed by Gondor after Sauron's ultimate defeat a few weeks later.

After the War, Osgiliath was apparently rebuilt,[source?] but it never became as great as it once was. Minas Tirith remained the capital and King's city.[source?]

Because the city was not visited in the books, it did not appear in many adaptations.

Osgiliath is one of the many maps of this game. The maps shows the bridge but the city itself is not shown.

After capturing Frodo and Sam, Faramir takes them to Osgiliath, in the hope of harnessing the power of the Ring to the betterment of Gondor. Osgiliath is fully ruined, and partly flooded. After being attacked by several winged Nazgûl, Faramir releases them.

In a scene in the Extended Edition, Faramir has a flashback. Boromir reclaims the city for Gondor, and the soldiers feast. The scene is meant to highlight the relation between Boromir, Faramir and Denethor.

Gothmog and his orcs finally breach the defences of the Gondorian troopers, and beat them back with heavy losses. Madril is slain, as are several others. On their retreat to Minas Tirith, they are beset by the Nazgûl, only to be saved by Gandalf.

Not impressed by Faramir's deeds, and more upset about the loss of Osgiliath, Denethor sends his son back to Osgiliath, but his company is slaughtered, and Faramir badly wounded. This scene replaced the defence of the Causeway Forts in the book.

Osgiliath is featured in the game with it's appeareance being based on Peter Jckson's films.It appear's in both good and evil campaign.

Concept art of Osgiliath was created by Snowblind Studios and appears in the trailer The Lord of the Rings: War in the North - Dev Video: Art Direction Process. It is unknown if Osgiliath will appear in the game.

Osgiliath was an area in the Eastern Gondor region. At the eastern entrance were the Gates of the Moon, beyond which was the Court of Isildur. At the western entrance were the Gates of the Sun and the Court of Anárion. The Palace of Eldacar was in the north-west corner of the city. After Osgiliath was overrun by the Morgul-host, Mablung and Damrod led the surviving Rangers of Ithilien in the city into hiding in the culverts.