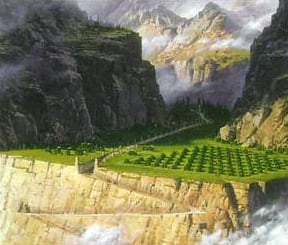 Dunharrow was a refuge of the Rohirrim hidden in the White Mountains south of Edoras[1] and fortified against attack. Dunharrow was a high clifftop overlooking Harrowdale, the valley of the river Snowbourn. It was located at the foot of the mountain Starkhorn, on its north side stood the peak of Írensaga, and on the east the great black mountain Dwimorberg.

In order to reach the refuge, a winding path had to be used, known as the Stair of the Hold leading to the "Firienfeld", a large grassy area for the encampment of soldiers and refuge-seekers.

Large carved stones marked the entrance to the Dimholt, a natural amphitheatre, which led into the Paths of the Dead.[2] 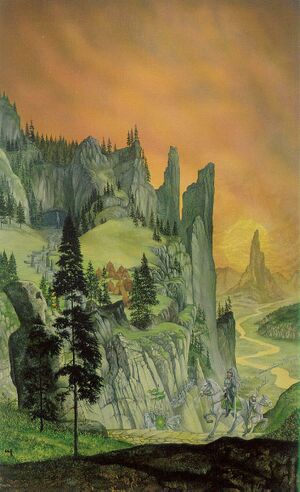 "Theoden's army on the road to Dunharrow" by Roger Garland

Dunharrow had been used as a refuge sacred place by the Pre-Númenórean Middle Men of the White Mountains during the Second Age — nearly three millennia before the establishment of the Kingdom of Rohan.

Those Men of the White Mountains had lined the winding path with statues known as the Púkel-men — statues originally carved in the likeness of the Drúedain.[2]

When the Rohirrim came to the region, they recognised the "heathen fane" and they used it as a refuge.

Some Orcs who fled the War of the Dwarves and Orcs tried to traverse Rohan and reach the White Mountains. Those invaders were hunted down by Brytta Léofa. However some were seen still lingering in Dunharrow, where King Walda was killed by an Orc in T.A. 2851.[3]

Aragorn, Gimli, Legolas, and the Grey Company arrived at Dunharrow on 7 March T.A. 3019 and then left at dawn the next day to take the Paths of the Dead. Théoden and his riders (with Merry) came to Dunharrow on 9 March and rode out for Gondor on the 10th.[4]

Tolkien made Dunharrow the Modern English form of Rohanese (Old English) Dúnharg (or Dūnhaerg), meaning "the heathen fane on the hillside".[5][6]

Tolkien notes that he modernised the element haerg since harrow exists as an element in English place-names.[6] 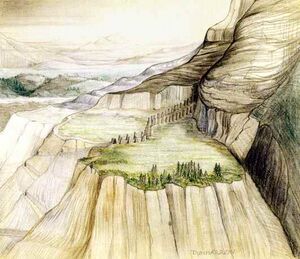 Tolkien had made an illustration of Dunharrow and the Firienfeld, that was first published in The Lord of the Rings 1977 Calendar. That illustration represented an earlier conception of the Dark Door, that didn't fit the description in the published text. Christopher Tolkien noted that the Dimholt and the pillar of stone are absent. Tolkien himself had added the note 'No longer fits story'.[7]

Tolkien made two other drawings of Dunharrow , which were published in Sauron Defeated and also represented earlier conceptions that do not fit the description in the published text.[8]