Amon Hen was the westernmost of the three peaks at the southern end of Nen Hithoel; the others being Tol Brandir and Amon Lhaw. Atop Amon Hen was an ancient chair, the Seat of Seeing, built within a great circular stone-paved court surrounded by a battlement, all of which was in ruins when visited by Frodo Baggins. At Amon Hen, Frodo saw visions far beyond what he would normally be able to see.[1]

Upon Amon Hen were the remains of an ancient road that had dwindled to little more than a path. In places where the hill grew steep, stairs had been hewn, although over time they had become cracked, worn, and split by tree roots. The path wound through rowan trees to the summit, where there was a wide flat circle paved with large stones and encircled with a ruined battlement. In the center of the circle was an ancient chair, the Seat of Seeing.[1]

The Seat of Seeing was an ancient chair built upon the summit of Amon Hen within a great circular stone-paved court surrounded by a battlement. By the time Frodo Baggins visited the Seat it lay in ruins. The high seat rested upon four carven pillars and could be reached by a stair of many steps.[1]

The high seat upon Amon Hen had been made in the days of the great kings, according to Aragorn.[3] The high seat was built before the time of the Stewards, which meant that when Frodo sat there it was at a minimum 969 years old. One likely possibility is that the Seat of Seeing was built at the same time as the Argonath, which occurred after Minalcar defeated the Easterlings (in T.A. 1248) but before the end of his reign (he died in T.A. 1366).[4] 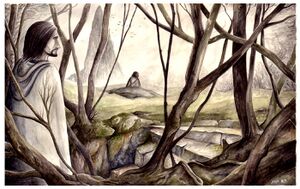 Boromir and Frodo on Amon Hen by Peter Xavier Price

On 26 February T.A. 3019, after Frodo had fled from Boromir he came to the summit of the hill and, while still wearing the One Ring, sat in the high seat. At first he saw little but mist and shadows, but soon he perceived many visions, soundless but filled with bright living images. The visions he saw stretched far beyond the normal range of sight (for instance, he saw the Ethir Anduin, over 300 miles away and behind the White Mountains) and everywhere he looked he saw signs of war. His glimpse of Minas Tirith filled him with hope, which was crushed when he looked at Barad-dûr.[1]

Frodo then became aware of the gaze of the Eye, which felt like a finger was trying to nail him down. He jumped out of the chair and cowered with his hood covering his head. At that moment from some other point of power came another thought: “Take it off! Take it off! Fool, take it off! Take off the Ring!” Balanced between Eye and Voice, Frodo regained his ability to choose and removed the Ring an instant before he was discovered. Frodo then realised what he must do, which was to go to Mordor alone, and he left the Seat of Seeing behind.[1] While searching for Frodo, Aragorn ran to the summit and sat on the chair.[5] Even though he was the heir of Isildur he saw no visions.

The identity of the Voice that strove against the Eye was later revealed when Aragorn, Gimli, and Legolas first meet Gandalf the White in Fangorn Forest. Gandalf informs the others that the Ring was nearly revealed to Sauron but "I sat in a high place, and I strove with the Dark Tower; and the Shadow passed".[6]

The name is Sindarin and is usually translated as "Hill of Sight", but more literally "Hill of the Eye", from amon ("hill") and hen ("eye").[7]

In his drafts, Tolkien first gave it the Quenya name Tirmindon ("Watchtower").[8]

The scene at the Seat of Seeing is altered and condensed. Frodo, wearing the Ring, ran up a platform (no chair is seen) and the only vision he experienced was of Barad-dúr and the Eye. Confronted by the Eye and voice of Sauron, Frodo yanked off the Ring and fell off the platform. Unlike the book, he then met Aragorn and told Aragorn he must leave. The force of Uruk-hai from Saruman then arrived and Frodo fled while Aragorn, later joined by Legolas and Gimli, fought the orcs on the hilltop.