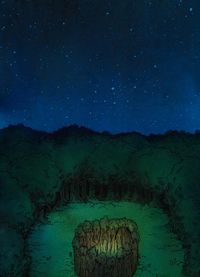 Derndingle was a hollow in the south of Fangorn Forest, used by the Ents from time immemorial as the place where they met in Entmoot. In shape it was a wide round depression, surrounded by a dark green hedge of evergreen trees. The hollow itself was clear of trees, except for three tall silver birches that grew in its centre.[1]

The name Derndingle is Mannish in origin but of course comes from an old version of Westron when Gondorians still remembered the Ents.