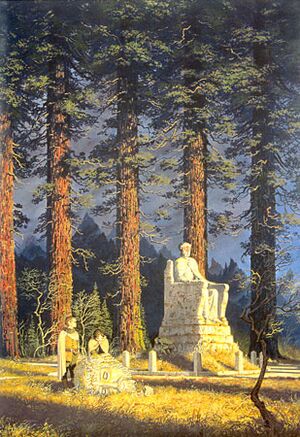 Ted Nasmith - At the Cross-roads

The Cross-roads of the Fallen King was the point in the land of Ithilien where the north-south Harad Road was crossed by the east-west road from Osgiliath to Minas Ithil (later Minas Morgul).[1]

Originally maintained by the Men of Gondor, who grew tall trees and built a statue of a king, the Cross-roads had effectively fallen under the control of Sauron at the time of the War of the Ring. Orcs had befouled the statue; its head had been knocked off and replaced by a stone effigy.

On their way to Mordor, Frodo, Sam, and Gollum came to the Cross-roads around March 10. They were in a belt of trees of vast size. Next to the road leading to Osgiliath they found the defiled statue, but seeing its fallen head gave Frodo hope, for nature crowned it with flowers.[2]

Sometime later, in the evening of March 18, a vanguard of Army of the West passed by the Cross-roads. Aragorn ordered a fanfare of trumpeteers and ceremoniously reclaimed the lands in the name of the Lords of Gondor. Soldiers broke the defiling stone-head and restored the statue also washing the scrawls away.

The next day they were joined by the main Host. Before leaving, they stationed a strong force of archers there, to guard against any attack from the East or South, and resumed their course towards Mordor.[3]