"My business is with Isengard tonight— with the rock and stone."
― Treebeard in The Two Towers, "Flotsam and Jetsam"

Isengard was a great fortress located within a valley at the southern end of the Misty Mountains near the Gap of Rohan. In the centre of the Ring of Isengard stood the stone tower of Orthanc.[2]

The fortress of Isengard was located in a valley at the southern tip of the Misty Mountains; the Ring of Isengard was a great wall of stone that ran out from the mountain-side and then back again. The only entrance to Isengard was found delved into the southern wall of Isengard. One entering Isengard would pass through its only gate, travel down the long tunnel and pass through the iron doors to come to the plain of Isengard. In the centre of the plain, half a mile from the gate, stood the looming tower of Orthanc. For most of its history the lands of Isengard were green and a river ran from the mountains to form a lake. However after the treason of Saruman all green things that grew were removed and the river was dammed. The inner-ring was riddled with houses which cut into the walls. About the plain great shafts had been dug deep and many stone-flags paved the roads of the surface.[6][7]

A great ring-wall of stone, like towering cliffs, stood out from the shelter of the mountain-side, from which it ran and then returned again. One entrance only was there made in it, a great arch delved in the southern wall. Here through the black rock a long tunnel had been hewn, closed at either end with mighty doors of iron. They were so wrought and poised upon their huge hinges, posts of steel driven into the living stone, that when unbarred they could be moved with a light thrust of the arms, noiselessly. One who passed in and came at length out of the echoing tunnel, beheld a plain, a great circle, somewhat hollowed like a vast shallow bowl: a mile it measured from rim to rim.
—The Two Towers, "The Road to Isengard" 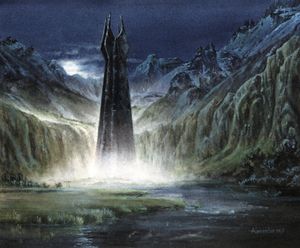 It is unknown exactly when Isengard was first established. However it must have been built between S.A. 3320, the year in which the realms of Gondor and Arnor were established, and S.A. 3430, the year in which the Last Alliance of Elves and Men was formed.[8] The Ring of Isengard, and the tower of Orthanc therein, were built by the Dúnedain, the Exiles of Númenor, as a fortress on the north-western tip of Gondor. Within Orthanc was placed one of the seven seeing stones, the palantíri.[3] This stone would be later referred to as the Orthanc-stone.[9]

Calenardhon, a region never densely populated, suffered greatly at the hands of the T.A. 1636 Great Plague. Orthanc was thus closed and its keys were sent to Minas Tirith.[10] The fortress of Isengard, however, remained manned by a small garrison led by a hereditary Gondorian chieftain. This company grew more secretive as time progressed; its chieftain became known as the "Lord of Isengard" and they were believed to meddle in dark magic by the Rohirrim.[4]

The attention of the Stewards of Gondor turned eastwards and their emissaries to Isengard eventually ceased completely. In their neglect they (and the Rohirrim) did not realise that the line of Gondorian chieftains had failed. The people had long intermingled with the Dunlendings and became more friendly to them than to the 'wild Northmen'. Dunlendings were allowed to settle in and around Isengard. They seized control of the fortress and killed any of the ancient Isengard guards who were unwilling to merge with them. During the reign of King Déor they became openly hostile to the Rohirrim. Déor could not besiege Isengard and Egalmoth, the Steward of Gondor, was unable to send help. Instead Déor kept a strong force of riders in the north of the Westfold.[4] The occupation lasted through the reign of King Gram.[11]

In T.A. 2758, Wulf led the Dundlendings into a great invasion of Rohan. Despite impressive victories, they were eventually defeated by the Rohirrim. The Dundlendings who occupied Isengard suffered considerably in the Long Winter. They capitulated and were driven out by Fréaláf (soon to be the new king of Rohan) near the end of T.A. 2759.[11][4]

When the Wizard Saruman returned from his travels into the east of Middle-earth, he offered to make Isengard his home and to command the defences of the West. As both Gondor and Rohan suffered from the Long Winter and wars, the White Messenger was welcomed by King Fréaláf and Steward Beren alike. In T.A. 2759,[12] The valley in which Isengard resided soon became known as "Nan Curunír", the "Valley of Saruman" or the "Wizard's Vale".[1][7]

In T.A. 2953[note 1], following the last meeting of the White Council, the Wizard took Isengard for his own as Lord of Isengard, and fortified it.[13][12] Around T.A. 2990, Orcs began mustering and breeding in muddy pits tunneled within the ringed walls. [14] With the corrupted Wizard suborned by the Dark Lord through the palantír,[13] Isengard became a nominal fiefdom of Mordor, as Saruman wished to share in Sauron's power by either aiding his victory or retrieving the One Ring first.[2]

On 10 July, T.A. 3018, Gandalf arrived at Isengard, having been summoned there by Saruman.[15] The fallen White Wizard revealed his true colours and demanded that the Grey Pilgrim submit to him or to the Dark Lord. Gandalf refused both choices and was imprisoned atop Orthanc. From the pinnacle of the tower Gandalf could see that Isengard had been transformed; in place of trees and grass were pits and forges, and Saruman was assembling his Orcs and Wolves into an army both in service and in rivalry of Sauron.[2] On 18 September, T.A. 3018, Gandalf was borne away by Gwaihir the eagle.[15]

Believing that Saruman knew the location of the One Ring, Sauron sent the Nazgûl to Isengard. The Witch-king arrived at the gate of Isengard two days after Gandalf's escape (or, according to a different account, on the very day of his escape). But the Lord of Morgul and his company did not have the strength to assault Isengard. The Nazgûl departed after Saruman told them that he believed Gandalf knew the whereabouts of the Ring and suggested they seek him out.[16]

Isengard became Saruman's base of operations during the War of the Ring. His war with Rohan began on 25 February, T.A. 3019, with the First Battle of the Fords of Isen. The forces of Isengard were victorious and Saruman's main objective, the killing of Théodred (son of King Théoden), was achieved. With another victory at the Second Battle of the Fords of Isen on 2 March, the legions of Isengard won passage into the plains of Rohan and marched towards defeat at the Battle of the Hornburg (on 3 March).[15][4] 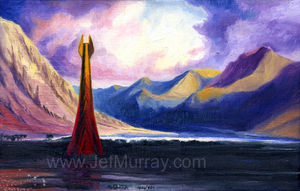 Jef Murray - After the Flood

My business is with Isengard tonight, with rock and stone.
—Treebeard[6]

On 2 March, the Battle of Isengard began when the Ents of Fangorn Forest began their attack.[15] They overran the Orcs and vile Men therein, but were unable to assail the tower of Orthanc.[6]

On 5 March, Merry and Pippin, now the "doorwardens" of Isengard, welcomed Théoden, Éomer, Gandalf, Aragorn, Legolas, and Gimli.[7] They parleyed with Saruman, but he refused to co-operate and was so left locked in Orthanc until the defeat of his master, Sauron.[17]

On 22 August, T.A. 3019,[18] Treebeard, now in charge of Isengard,[7] allowed Saruman and Gríma to depart from what remained of the fortress. Before they went, they handed over the keys of Orthanc. This Treebeard told to Gandalf and company when they travelled through Isengard on their journey home.[5]

Treegarth and the Fourth Age[edit]

Following the [[Battle of Isengard] în which the Ring of Isengard was Destroyer, the Ents filled the land with gardens of orchards and trees. A stream ran into a small clear lake, in the middle of which stood the black-stone tower of Orthanc. Whilst the Treegarth of Orthanc became part of the Reunited Kingdom, King Elessar granted the Ents complete self-governance of what was formerly Isengard.[5]

Isengard means "Iron-enclosure" in Old English (see also Isen): "It was so called because of the great hardness of the stone in that place and especially in the central tower of Orthanc."[19]

Isen is a variant form of Old English iren 'iron.' 'Gard' is a modernization of Old English geard meaning 'enclosure,' which occurs in Old English Middangeard, the equivalent of Old Norse Midgard, both of which mean the world of Men. Through misunderstanding, Middangeard became Middanerd > 'Middle-earth.' The name Isengard represents a Westron translation of Sindarin Angrenost.[19]

Peter Jackson's Isengard is reflective of J.R.R. Tolkien's descriptions of the fortress.

Isengard is one of the many battlefields of this game.

Isengard is a prominent stronghold of evil within Eriador, and is the chief fortress of Saruman and his faction, the White Hand. It is available for exploration, and plays host to various instances.[22]