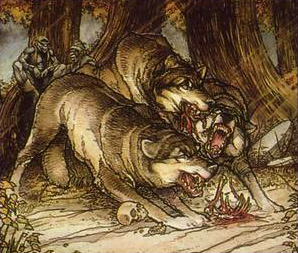 Wolves were animals that could be found within Middle-earth during all three ages.

Wolves were of old allied with the Dark Lord,[1] and were often used as steeds by the Orcs.[2] Wolves, or creatures in wolf-shapes, first came to Beleriand over mountain passes or through dark forests alongside other fell creatures during Melkor's third age of captivity.[3]

During Fingolfin's suicidal duel with Morgoth, his body was broken and cast to great wolves of Angband.[4] Rochallor stayed with Fingolfin until his death. Yet when he was assailed by the great wolves, the great steed escaped an immediate death by outrunning them due to his swiftness only to die when his heart broke upon coming to Hithlum.[5]

When Sauron took over the isle of Tol Sirion, he built a watch-tower upon it and renamed the isle to Tol-in-Gaurhoth, and becoming the "Lord of Werewolves".[4] These werewolves of Angband were bred from the great wolf Draugluin. Of which, Carcharoth was said to be the greatest of those descended from him.[2]

When Gorlim was deceived into betraying Barahir, he heard wolf howls when the deception was unmasked and Sauron revealed himself.[2]

When Sauron had sent many wolves into the Talath Dirnen, Celegorm and Curufin took their wolf-hounds, of whom Huan was their chief, and hunted the wolves down. It was said that Huan would meet his end upon encountering the greatest wolf to walk upon Arda.[2]

When Huan and Lúthien assailed Sauron's watch-tower, they were met with an army of wolves which Sauron sent to attack them on the bridge one by one before sending Draugluin himself, only for him to be also be killed by Huan. After his death, Sauron decided to take on the form of the mightiest wolf in order to fulfill the prophecy of Huan's death, but failed and yielded Tol-in-Gaurhoth.[2]

Wolves were among the creatures that fought for Morgoth during the Nirnaeth Arnoediad, after which, they moved freely alongside Orcs into Beleriand as far southwards as Nan-tathren and Ossiriand.[1]

Wolves were among the Orcs that were holding Túrin captive. Four of these Wolf-sentinels were shot by the Elf, Beleg to free his friend.[6]

Wolves were among the forces that Morgoth used to assail the city of Gondolin.[7]

During the Watchful Peace, Aragorn ruled as the fifth Chieftain of the Dúnedain for only eight years before his life was cut short in T.A. 2327, when he was killed by wild wolves in Eriador.[8]

After Gandalf had escaped Isengard, Saruman sent out wolves and orcs in pursuit.[9]

On 13 January of T.A. 3019 the Fellowship of the Ring camped at Hollin and were attacked by wolves.[10] The next morning no remains of Wolves were found around.

In Quenya, one of the words for "wolf" is ñarmo or narmo. Cognates of the same meaning are Doriathrin garm, and Noldorin garaf. (A "wolf-howl" is naule in Quenya, and gaul in Noldorin.)[11]

In Gnomish, one of Tolkien's early conceptions of an Elven language, "wolf" is harog or harw; "a she-wolf" is harach;[13] Qenya has ulku "wolf".[14]

In The Book of Lost Tales Part One, the discarded Valar siblings, Makar and Meássë, hunted wolves and Bears within the black mountains.[15]

In The Book of Lost Tales Part Two, it was said that poisonous snake dwelled where wolves roamed.[16]

There are, however, no wolf species native to Southern Africa.

In the first episode of the first season, wolf-tracks are spotted by Dilly Brandyfoot, causing Elanor Brandyfoot to spot a wolf atop a hill and then order the Harfoot children back to the community's current dwelling place. In the third episode, it is revealed during Sadoc Burrows's speech of remembrance that one Harfoot, Daffodil Burrows, was killed and taken by wolves during a previous migration.