Nan-tathren, the "Land of Willows", was a region in Beleriand. It was located where the River Narog met the great River Sirion, a little to the north of the Mouths of Sirion.[1]

Famed for its willows and its flowered meadows, Nan-tathren was a desolate land.[1] The region played little part in the history of Arda, and was perhaps inhabited by Ents[2]. The Land of Willows is said to be the place were butterflies of all kinds came into the world, and they remained common there during the First Age.[3]:154

After Morgoth's triumph in the Nirnaeth Arnoediad, his Orcs and wolves are said to have roamed even the distant southern lands of Nan-tathren and Ossiriand, causing none of the Free peoples in Beleriand to be secure.[4] 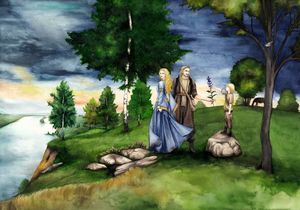 The refugees from Gondolin, led by Tuor, rested in Nan-tathren for a while on their long journey south from their city's ruin. They were healed of their wounds and sorrows by Ulmo's power, which was strong in the land from his presence in the River Sirion. There Tuor sang to his son Eärendil a song about his encounter with Ulmo, awakening in both the sea-longing.[5]

In the late Third Age, Treebeard remembered Nan-tathren and sang about "the willow-meads of Tasarinan" to Merry and Pippin.[6]

Nan-tathren is a Sindarin name, meaning "vale of willows" or "land of willows".[7]

In The Fall of Gondolin the 'Land of Willows' is located in roughly the same place as in the later geography of the legendarium, but Tuor visits it before, as well as after, his sojourn in Gondolin. Its beauty caused Tuor to tarry there longer than Ulmo had purposed — only leaving when the Vala appeared to him directly and ordered him to seek Gondolin. Following the sack of the city the refugees came to the Land of Willows and stayed there several years, until Tuor's 'sea-longing' drove them on to the Mouths of Sirion.[3]