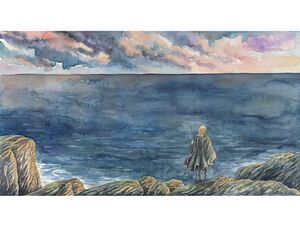 Tuor's first view of the sea by Anke Eißmann

Sea-longing, or the Unquiet of Ulmo,[1] was a strong desire to return to the sea that typically affected the Eldar.

The Noldor who lingered in Middle-earth had an unquietable yearning for the Sea, coupled with their nostalgia of their home. It was slumbering in the hearts of the Sindar, until it awoke[2] after seeing Belegaer, the Great Sea to the west of Middle-earth, for the first time. The cry of the gulls awakened the sea-longing in Legolas' heart when he heard them at Pelargir.[3]

Tuor first felt the sea-longing when he looked upon Belegaer, and he felt it ever afterwards. This longing was also passed on to his son, Eärendil.[4] In addition, those that heard the music of the Ulumúri, the horns of Ulmo, would always feel a longing for the sea.[5]

In the summer of 1914 Tolkien visited the Lizard Peninsula in Cornwall where the sea left a great impression on him, and inspired him to write a poem.[6]