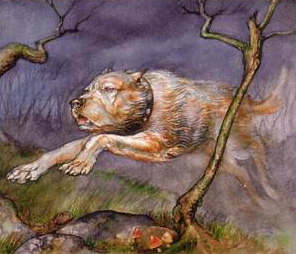 Hounds were dogs bred for hunting.

Hounds were among the favorite animals of Oromë.[1] The greatest of all hounds in the histories of Middle-earth was Huan the Hound of Valinor, one of the Hounds of Oromë, who defeated Sauron in single combat.[2]

In Gnomish, one of Tolkien's early conceptions of an Elven language, the word for "large hound" is gobi or gôbi. The word saur means "hound, wild dog".[5]

The Hound most often refers to "the fierce wolfhound (S. 'huadraug')", used by Men or Hobbits, and sometimes found in the wild. In the Elder Days, the Hounds were used by noble Men to hunt Morgoth's wargs and werewolves.[6]