"But Huan the hound was true of heart."
― Quenta Silmarillion, "Of Beren and Lúthien"

Huan, the Hound of Valinor, was a great wolfhound, one of the hunting dogs of Oromë the Hunter.

Huan had been granted special powers by the Valar, he was as large as a small horse, immortal, tireless and sleepless, and was allowed to speak three times before he died. It was also prophesied that he could not be killed unless it was by the greatest wolf that ever lived; in this case a werewolf. 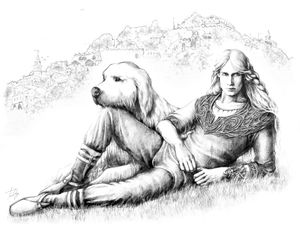 Celegorm the Fair by Tuuliky

Huan was given by Oromë to his friend Celegorm, one of the Sons of Fëanor and accompanied him on his huntings in the regions of Valinor. When the Noldor under Fëanor rebelled, Huan went with his master to Middle-earth. Presumably he was with his master while he dwelt in Himlad, and then when he retreated to Nargothrond by the late 5th century after their arrival.

Huan was with Celegorm and Curufin who were hunting when he smelled Lúthien and captured and brought the maid before Celegorm. She had set out to rescue Beren, who had gone with Finrod Felagund to Angband but had been captured in Tol-in-Gaurhoth. Celegorm and Curufin did not reveal to her that they had sent Beren to his death by the hand of Sauron, and took her as a prisoner to Nargothrond, "for her own protection", secretly plotting to wed her to Celegorm and thereby force an alliance with Lúthien's father Thingol. 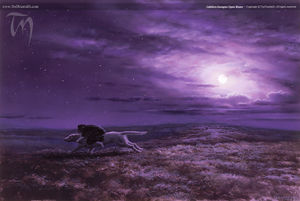 Huan felt pity for Lúthien, and sought her out and so he became involved with the Quest for the Silmaril. Speaking for the first time, he told her of a way to escape, and then accompanied her to Tol-in-Gaurhoth where, with the help of Lúthien's magic, he killed all of Sauron's Werewolves until Sauron himself came out, taking the shape of the greatest wolf that had ever lived. Huan nevertheless managed to defeat him, and Sauron was forced to flee. Huan went back to his master, while Lúthien and Beren went on their way back to Doriath. They came across Celegorm and Curufin, who had been exiled from Nargothrond by Orodreth when he learned of their deeds. Curufin tried to kill Lúthien, but Huan turned against his master, defending Beren and Lúthien.

Speaking for the second time, Huan told Beren and Lúthien of his plan to gain entrance to Angband, bringing them the skin of the werewolf Draugluin and the bat-skin of Sauron's messenger Thuringwethil. Using these skins as disguise Beren and Lúthien went to Angband, while Huan hunted in the wild.

After Beren and Lúthien had won the Silmaril but Beren had lost his hand to the werewolf Carcharoth, Huan joined Beren, Thingol, Beleg Cúthalion and Mablung in the Hunting of the Wolf. Huan and Beren managed to kill Carcharoth, but Huan was mortally wounded, as was Beren. Speaking for the third and last time, he wished Beren and Lúthien farewell, and died, with Beren's palm upon his head.[2]

For some time Tolkien considered Huan as a dog-shaped Maia.[5] Later, however, Tolkien decided that Huan is just a animal, despite being a "higher level" one.[6] See Eagles: Origin and nature for more details.