Landroval was one of the Eagles.

A descendant of Thorondor, it is said that Landroval was his vassal in the First Age and with his brother Gwaihir helped him rescue Beren and Lúthien from Angband.[1]

During the War of the Ring he stayed out of the war for most of the conflict, but he followed his brother to the Battle of the Morannon, where he and his vassals helped turn the tide.

After the Ring was destroyed, Landroval, Gwaihir and Meneldor, flew into Mordor to retrieve Frodo and Sam from the ruins of Mount Doom.[2] 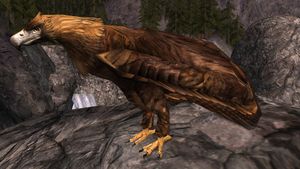 Landroval in The Lord of the Rings Online

Landroval and his brothers appear at several points throughout the game. The player first meet him and Meneldor in the Wailing Hills south of Lothlorien where they help the Eagles deal with an infestastion of spiders. After their participation in the Battle of the Morannon, the player meets the Eagles once again then they reach the Carrock. The player later encounters Landroval once again the Wells of Anduin.