Gwaihir was the greatest and the swiftest of the Eagles of Middle-earth at the time of the War of the Ring.

A descendant of Thorondor, it is said that Gwaihir was his vassal in the First Age and, with his brother Landroval, helped rescue Beren and Lúthien from Angband.[1] In the Third Age he was the greatest and the swiftest of the Eagles of the North.

During the War of the Ring, Radagast sought help of his old friends. The Eagles set off and gathered news: wolves and Orcs gathering and mustering, the movements of the Nine Riders, and the escape of Gollum from Mirkwood.

As instructed by Gandalf, Radagast sent Gwaihir to bear the news to him at Isengard, but Gandalf was at that time imprisoned at the pinnacle of Orthanc. On an autumn night, Gandalf saw the Eagle flying towards him and so Gwaihir rescued the Wizard. But Gwaihir couldn't carry him far, so Gwaihir left him at Edoras in order to find a steed.[2]

Later he was sent by Galadriel to find Gandalf; he found him on the peak of Celebdil after the Battle of the Peak, and carried him to Lothlórien.[3]

Gwaihir, Meneldor and Landroval helped the Free peoples in the Battle of the Morannon; in the aftermath, they brought Frodo and Sam out of Mordor after the One Ring was destroyed.[4] 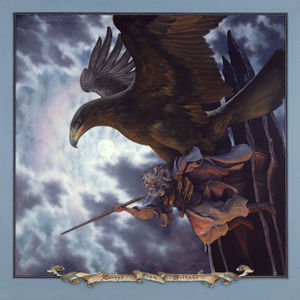 Gwaihir comes from Sindarin gwaew ("wind")[5] and possibly hîr "lord". His name could thus likely be translated as "Windlord".

Eagles named "Gwaihir" and "Landroval" (or, in even earlier texts, "Gwaewar" and "Lhandroval") appeared in early Silmarillion, as vassals of Thorondor who helped to bear Beren and Lúthien from Angband[1]. These references were removed by Christopher Tolkien to escape the seeming discrepancy with The Lord of the Rings, although later he admitted that he was not sure about his father's intentions.[6][7]

Gandalf whispers "Gwaihir" repeatedly to a moth that arrives at Isengard. Later, Gwaihir rescues Gandalf from Isengard, and carries him to safety.

Gwaihir and his Eagles come to aid at the Battle of the Morannon. They attack the Nazgûl and their fell beasts. After the battle is won and the One Ring destroyed, Gwaihir along with Gandalf and a second Eagle rescue Frodo Baggins and Samwise Gamgee from the rocks of Mount Doom.

Alexander John provided the voice of Gwaihir during Gandalf's rescue from Orthanc.

Gwaihir is first mentioned by Gandalf when the player meets up with him at the Prancing Pony.[9] The player first sees Gwaihir when entering Galadriel's garden in Lothlórien for the first time.[10] Later, he arrives on the peak of Iorbar in the Misty Mountains to reclaim a stolen eagle egg taken by a giant. Finally, he arrives at and participates in the Battle of the Morannon with the other eagles, and saves Frodo and Sam from the slopes of Mount Doom.

Gwaihir is first mentioned in chapter 1, in which Beleram tells that he has been sent by Gwaihir to gather news. Later on in the game, he makes a full appearance.[11]