Battle of the Peak 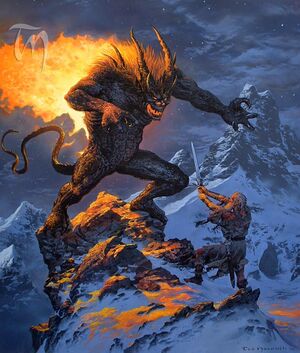 Gandalf and the Balrog upon Celebdil by Ted Nasmith

"...Those that looked up from afar thought that the mountain was crowned with storm. Thunder they heard, and lightning, they said, smote upon Celebdil, and leaped back broken into tongues of fire."
― The Two Towers, "The White Rider"

The Battle of the Peak was Gandalf's name for his climactic battle with the Balrog known as Durin's Bane, on the peak of the mountain called Silvertine.

Gandalf pursued the Balrog from the deepests dungeons of Moria to Durin's Tower, climbing through the whole Endless Stair.[1] On the peak they fought for three days and two nights from 23 to 25 January T.A. 3019.[2] During the battle, the Tower was destroyed and the entrance to the Stair was blocked. In the end, the Balrog was cast down and it broke the mountain-side as it fell. Gandalf himself died following this ordeal, but was later sent back to Middle-earth with even greater powers as Gandalf the White.[1]