The Prancing Pony was a large inn and important gathering place at Bree.

The inn was located just where the East Road bent round the foot of Bree-hill, within the dike that stretched around the town. The building was three stories tall with many windows. Its front faced the Road and it had two wings that ran back towards the elevated ground of the hill, such that in the rear the second floor was at ground level.

Between the wings was a courtyard that was accessible through an archway. Under the arch a few steps on the left led to main door. Above the arch was a lamp that illuminated the sign beneath, which showed a fat pony rearing on its hind legs. A white-lettered inscription over the door announced "The Prancing Pony by Barliman Butterbur".

In the north wing there were rooms on the ground floor that had been especially built for hobbit guests. The centre of activity was the big common-room where drinks were served near a cheery log fire,[1] and lanterns were hanging on the roof beams.[2] 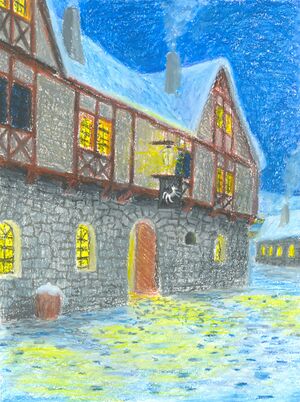 The Prancing Pony by Matěj Čadil

The Prancing Pony had been built long before the time of the War of the Ring, when traffic on the roads had been much greater. Despite diminished numbers of visitors the inn had remained an important centre of news, since Bree was at the crossroads of the East Road and the Greenway, which came up from the south and went onwards to Fornost.[1]

The inn had been kept by the Butterbur Family for generations as a convivial gathering place for Men, Dwarves, and Hobbits (both those living in Bree and travellers from the Shire). Tobold Hornblower was one of the Shire Hobbits who visited Bree and probably the Prancing Pony, where he learned about Pipe-weed.[3] Around T.A. 2670 Old Toby brought back samples of the plant to the Southfarthing[4] where it became a major product of Hobbit agriculture, but the centre of the "art" of smoking remained at the old inn.[3]

It was perhaps in the Pony where the Wizard Gandalf met Dwarven King-in-Exile Thorin Oakenshield in the spring of T.A. 2941. That meeting set the stage for the Quest of Erebor.[5][note 1] When Bilbo Baggins and the dwarves travelled eastward on their journey to the Lonely Mountain later that year,[4] it is very probable that they stayed at the Prancing Pony, although Bilbo did not specifically mention it in his memoir.[note 2]

At the time of the War of the Ring, the inn was owned and managed by Barliman Butterbur, a man who was somewhat absent-minded at times. He had two hobbit assistants, Nob and Bob. In Mid-year's Day T.A. 3018 the inn was once again visited by Gandalf, who left Barliman a letter for a Frodo Baggins in Hobbiton. Barliman did not find anyone willing to bring it to the Shire, and it was soon forgotten.[6]

On the last Monday of September T.A. 3018[note 3] two "black men" knocked, asking Nob for one Baggins. Barliman noticed that their presence made the dogs and geese of the inn noisy and terrified Nob. He slammed the door on them, and later heard that they continued all the way to Archet.[6]

The night before Frodo Baggins and his companions arrived another party (of men) came to the inn, travelling up the Greenway from the South.[1] 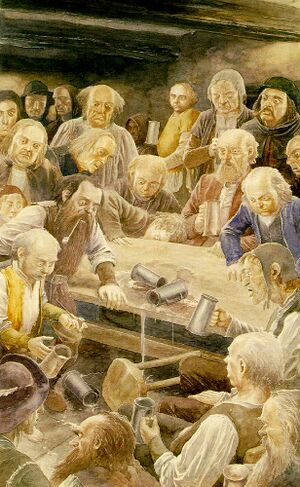 The Inn at Bree by Alan Lee

On 29 September T.A. 3018, Frodo, Samwise Gamgee, Peregrin Took, and Meriadoc Brandybuck arrived at Bree and came to the Prancing Pony.[7] The hobbits had followed Gandalf's instructions and expected to meet him there, but the Wizard was nowhere to be found. After supper in their room all except Merry went to the big common-room. It was here that "Mr. Underhill" (Frodo) first met Strider and where the One Ring got onto his finger when he fell off of a table.[1]

In the parlour of their rooms the hobbits met Strider, who eventually (aided by Gandalf's letter that was now brought in by Barliman) convinced Frodo that he was a friend who could guide them. When they learned that Merry had seen a Black Rider within Bree they abandoned their lodgings and spent the night in Strider's room.[6]

In the early hours of 30 September the Hobbits' room was attacked, although no one heard the intruders. It was also discovered that the hobbits' ponies and the horses of all of the other guests had been driven off. While new mounts were being found the travellers managed to get a breakfast at the inn. Many hours later, Frodo, Sam, Merry, and Pippin left the Prancing Pony, guided by Strider.[8]

That same night, Gandalf, who was trying to catch up with Frodo, came to the inn. He was furious with Barliman's forgetfulness, who was very worried when he saw the hobbits leaving with the suspicious Ranger; but that made Gandalf forgive him as the Hobbits were alive and in good hands, and put a blessing on his beer. He left the next morning for Weathertop.

On 28 October 3019, Gandalf and the hobbits returned to Bree and stayed at the Prancing Pony.[9] There they learned of the troubles Bree had had since their departure over a year before. In return they told Barliman of their adventures and the news that the King had returned, who was none other than Strider. Best of all for Sam was the news the Bill the Pony had returned safely there.[10]

In 1960 J.R.R. Tolkien began a complete rewrite of The Hobbit in which he sought to refashion the story in the same "epic" mode as The Lord of the Rings. As part of this refashioning, Tolkien added elements that would tie the landscape of Eriador seen by Bilbo to that seen by Frodo. The stopping-place in Bree was specifically mentioned: "There [Bree] they spent their last comfortable night for many a day to come, in the great inn of Bree, the Prancing Pony, well-known to the hobbits of the east side of the Shire. "[11] In this version of the story Tolkien also sought to maintain an exact timeline, and the arrival at Bree occurred on 2 May 2941.[12] Eventually though Tolkien abandoned this effort to rewrite Bilbo's tale.

According to research conducted by a branch of the Tolkien Society, the Bell Inn in Moreton-in-Marsh was a source of inspiration when Tolkien created the Prancing Pony, since the former also has three storeys and an "entrance via a courtyard, and Moreton's similarities to the town of Bree".[13]

In the movie, the inn appears to be frequented only by suspicious-looking men; no hobbits are seen, and the atmosphere is more ominous than it is in the book.

The Prancing Pony is located in the north-east corner of Bree. The player meets up with Barliman Butterbur, Strider and Gandalf at various times in the inn during "Stirrings in the Darkness".

The Prancing Pony is an important structure in Bree. Eradan, Andriel and Farin meet with Aragorn in the Prancing Pony, in the Prologue of the game. Barliman Butterbur, the innkeeper, can be found behind the bar of the inn. The inn is visited by several Bree-landers, including Otto Aster and Tedder Hedgerow, and outlanders.[14]
According to Barliman Butterbur, the inn has existed almost as long as Bree has and has been in the possession of the Butterbur Family for many generations.[14]

The Prancing Pony appears in the opening scene of the film. It is the place where Gandalf and Thorin first meet and make their plans to restore Erebor.