"The Quest of Erebor" is a writing by J.R.R. Tolkien posthumously published by Christopher Tolkien in Unfinished Tales and in The Peoples of Middle-earth (also included as an appendix to the second edition of The Annotated Hobbit). This work explains how and why Gandalf arranged for the retaking of the Lonely Mountain (Erebor in Sindarin), an adventure recounted from the perspective of Bilbo Baggins some time before in the adventures The Hobbit.

"The Quest of Erebor" (as well as The Hunt for the Ring) was originally written between 1954-1955 to be a part of the Appendices to The Lord of the Rings but Tolkien was forced to omit them for lack of space,[1] and only a very abridged version of the tale occurred in the Appendices. There are two manuscripts extant of the work. Both are written in the first person, from the perspective of Frodo Baggins. However, nearly all the text consists of narration by Gandalf, who was telling the story at the request of Frodo in Minas Tirith after the coronation of King Elessar. 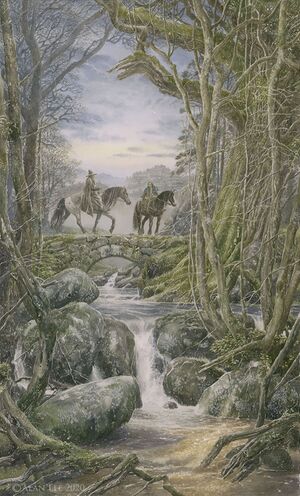 A chance meeting by Alan Lee

Gandalf knew that Smaug the Dragon could pose a serious threat if used by Sauron, then dwelling in Dol Guldur in Mirkwood. He was thinking about the matter when he met Thorin at Bree. Thorin also was concerned about Smaug, but had the different motive of revenge and the reclaiming of the Dwarves' treasure in the Lonely Mountain. Gandalf agreed to help Thorin.

Gandalf thought Bilbo, an unlikely choice, to be a suitable companion of Thorin and his Dwarves for a number of reasons. First, he had observed that Bilbo took an interest in the world at large, and was thus adventurous. Another reason is that Smaug would not recognize the scent of a Hobbit, advantageous to a stealthy operation. Thorin also did not think highly of Hobbits, and putting Bilbo in the expedition might prevent the proud Thorin from rash actions — such as openly challenging Smaug.

It was Thorin's objections to Bilbo that Gandalf found most difficult to overcome. Thorin believed that Bilbo was incapable of helping their adventure and that Gandalf might be simply meddling in his affairs for his own reasons. After much debate, Gandalf convinced Thorin that Bilbo would be a worthy member.