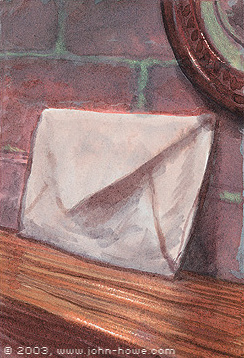 Gandalf's letter is a letter that Gandalf wrote and left to Barliman Butterbur, to be delivered to Frodo Baggins.[1]

Gandalf had told Frodo that they should take the One Ring to Rivendell; he promised to return to Hobbiton in late September when they would leave. He advised him to adopt the name "Mr. Underhill" when outside the Shire.[2]

It was Mid-year's Day and on his way he heard disturbing news from Radagast, that Black Riders were sent from Sauron to seek the Shire.[3] He came hastily to the Prancing Pony and wrote a warning letter to Frodo.[1] Gandalf then departed for Isengard to seek advice from Saruman.[3]

In the letter, written in his "strong but graceful script", Gandalf warned Frodo that he might not return when promised and that Frodo should leave as soon as possible, preferably before August; whenever Gandalf would be available, he would come to the Shire and try to catch up with them. If Frodo ever came to Bree he should trust Barliman Butterbur and leave a message for Gandalf. He also mentioned that Frodo might meet a Man in the area named Strider (whom Gandalf had already met and informed on May 1) who could assist him.

He concluded the letter with 3 warnings: that he should not wear the Ring again, and avoid traveling during night; he included a rhyme which would prove Strider's real identity, which is Aragorn; and finally, he mentioned his worries that the forgetful Barliman might not send this letter in time. The letter was signed with the certh "G" for Gandalf.[1]

Before leaving Bree, Gandalf instructed Barliman to send this letter to Hobbiton as soon as possible. He also told him to expect a "Mr. Underhill", whose real name was Baggins, giving Frodo's detailed description. However Gandalf's worries proved to be correct: He was captured in Orthanc and therefore could not reach Frodo on their assigned date.[3] Furthermore, Barliman could not find someone who would travel to Hobbiton, and day after day, this obligation was forgotten.[1]

Frodo never received the letter and kept on waiting for Gandalf in Hobbiton.[4] Having no sign from the Wizard, he departed on September 23,[5] much later than Gandalf would have instructed him. Meanwhile Gandalf had escaped Orthanc and rode Shadowfax to the Shire, less than a week after Frodo's departure.[5]

It was not until "Mr. Underhill" came to the Prancing Pony with a company of 3 hobbits when Butterbur made the connection. Strider happened also to be there and both he and the hobbits tried to discern each other's trustfullness. Butterbur arrived with the letter which proved to Frodo that Strider was Gandalf's friend, and Strider realized that Frodo was the halfling Gandalf told him about. However all were worried in absence of news from the Wizard.[1]

The hobbits resumed their travel to Rivendell with Strider the next morning,[6] without knowing that Gandalf would arrive to Bree that same night.[5]