Andriel is one of the three main characters of The Lord of the Rings: War in the North. She is an Elven Lore-master from Rivendell.[1] She is voiced by Laura Bailey.[2] 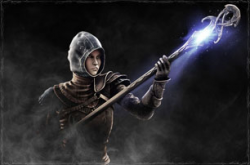 Andriel was born in Rivendell, and already in her youth she was skilled in healing and Magic. Elrond taught her more about magic and lore, while Elladan and Elrohir taught her about weapons and combat. While living in Rivendell she met Aragorn and Gandalf. After her training was complete she was sent many times to the wilderness of Eriador and Rhovanion by Elrond, to gather information about the world. Therefore, she has wandered much through the regions surrounding Rivendell. During these wanderings she has made contact with the Rangers of the North, including Halbarad and Eradan.[1]

In September T.A. 3018 she accompenied Gildor Inglorion to the Emyn Beraid, to look in the Palantír, and visit their kin in Lindon. Near Bree, Andriel got a premonition that something would happen in the south. She left the company and travelled through the Andrath to Sarn Ford. There she did speak with Halbarad, who did have the same feelings and had ordered his men to make barricades.[3] 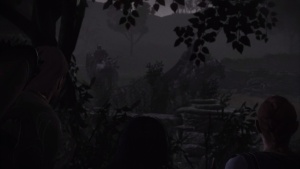 When the Nazgûl attacked the guard that morning Andriel assisted the Rangers, together with Eradan and Farin. They were defeated and many of the rangers were killed. Shortly after the attack the Witch-king meets with Agandaûr. Where the latter tells he had summoned the Orcs of the Misty Mountains and has assembled an army in Fornost. The Witch-king sends him back to Fornost, to attack immediately.[4]

Halbarad sent her, together with Eradan and Farin, to Bree, where they have to warn Aragorn. The three companions meet him in the Prancing Pony. After they told him about the conservation, he sends them immediately to Fornost to stop Agandaûr before he attacks.[4]

The three travelled to Fornost Erain, where they freed a giant Eagle - Beleram - and met with Elladan and Elrohir, who were sent by their father to uncover the darkness in Fornost.[5][6] Andriel, being an acquaintance of the twins, introduces her two companions and explains about their mission to stop Agandaûr's army. They team up with Beleram and the sons of Elrond to kill Agandaûr. On their way to the citadel they take seperate roads and defeat several ambushes of Orcs and Goblins.[6] 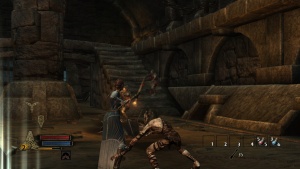 At the gate - magically protected by Agandaûr against intruders - they again join the sons of Elrond. While the twins remove the spell from the gate, Andriel and her companions protect them against an attack of Orcs and a Troll.[7] In the citadel tower they overhead Agandaûr and Tharzog, the chieftain of the Orcs of Mount Gram, who speak about intruders. While they attempt to follow Agandaûr, Tharzog notices them and commands his servants to close a gate. This seperates Andriel, Eradan and Farin again from Elladan and Elrohir. While the twins go onward, Andriel and her companions fight and kill Tharzog and his guard.[8]

After the death of Tharzog the three heroes go to the top of the citadel tower, where they find Agandaûr fighting the Sons of Elrond. Although Agandaûr had the upper hand in the fight, he could not defeat Andriel, Eradan, Farin and the sons of Elrond at the same time and flees on the back of a Fell beast. Beleram pursues Agandaûr, but the latter creates a thunderstorm above Fornost. After being hit by a lightning, Beleram draws back and returns to the tower. Here, Andriel and her companions speak with the Eagle about the events in Fornost. Andriel returns to Sarn Ford with Eradan and Farin, while Elladan and Elrohir go back to Rivendell and Beleram returns to his lord, Gwaihir.[8]

Her main weapon is a staff, which she uses for both melee- and ranged-combat. One of her abilities makes it possible to create a magical shield that protects her and the other members of her fellowship.[9] She is also able to use a blade.