Agandaûr's birth date, as well as most of his personal details, are unknown. He must have started serving Sauron somewhere in the Third Age. Agandaûr became a great warrior and sorcerer, likely being taught by Sauron himself.[2] 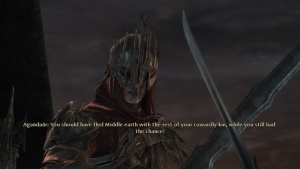 At the same time that the Nazgûl were sent to retrieve the One Ring, Agandaûr was sent north to conquer Eriador and destroy Rivendell.[3] Having stirred the Orcs of the Misty Mountains, he assembled a great army amidst the ruins of Fornost.[4] With Tharzog, chieftain of the Orcs of Mount Gram, in charge of his soldiery[1] he passed his knowledge of sorcery to the Orcs through the scrolls of his lieutenant, Wulfrun.[2]

Just shortly after the Nazgûl defeated the Rangers at Sarn Ford, Agandaûr met there with the Witch-king, Telling him he was ready to attack, as assistance for the Nine Riders in the Hunt for the Ring, he was ordered by the Witch-king to return and prepare his forces to join them.[4]

After his return to Fornost his soldiers captured a giant Eagle, named Beleram, who was spying on the gathering of Orcs. On Aragorn's order Eradan, a Dúnadan, Andriel, an Elf loremaster from Rivendell, and Farin, a Dwarf from Erebor, infiltrated Fornost to stop the army of Orcs from joining the Nazgûl. When they found the chained Eagle, they helped him to escape.[5] When they met with two more infiltrators, Elladan and Elrohir, they formed a team to cripple the Orc forces and slay Agandaûr.[6] After they fought a way to the citadel tower Eradan, Andriel and Farin dealt with Tharzog while Elladan and Elrohir confronted Agandaûr. Tharzog was killed but Agandaûr had the upper hand in his battle with the Half-elves. However, when the Half-elves where joined by Eradan, Andriel and Farin, he fled on the back of a Fell beast. Even though Beleram pursued him in the air, Agandaûr escaped the Eagle's clutches by summoning a thunder storm.[2]

In the aftermath of his retreat from Fornost Agandaûr turns to rallying his forces for his campaign in the North and forging alliances. Therefore, he recruits the renegade Stone-giant Bargrisar to Sauron's cause, using his vile war-bands of Orcs and Trolls to destroy the nests of the Great Eagles. [7]. Further, he enlists the Spider-Queen Saenathra of Mirkwood to silence the Wizard Radagast, in order to prevent him from sending messages to the Free Peoples. Both of his plots are foiled, yet Agandaûr resolves to treat with the Dragon Urgost on behalf of Sauron, offering him the neighboring Dwarven realm of Nordinbad in exchange for joining the Dark Lord's force that assaults the North. [8]

Agandaûr's conversation with the Dwarves of Nordinbad mentioned by Lord Gorin appears to be based on that of Dáin Ironfoot and the emissary of Sauron mentioned in The Council of Elrond.