Guardians of Middle-earth is a multiplayer online battle arena video game developed by Monolith Productions for PlayStation 3 and Xbox 360.[1] 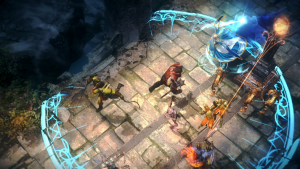 The player fights in a battle of ten combatants, five on each side, who are either controlled by online players or the AI. The player is able to choose out of twenty different "guardians" who have their own strengths and abilities. An in-game currency can be earned during battles and which can be used to buy items. During battles the player will be able to communicate with allied players with in-game voice communication.[1]