"Then, Éowyn of Rohan, I say to you that you are beautiful. In the valleys of our hills there are flowers fair and bright, and maidens fairer still; but neither flower nor lady have I seen till now in Gondor so lovely, and so sorrowful."
― Faramir, The Return of the King, "The Steward and the King"

"Do what you will; but I will hinder it, if I may."
"Hinder me? Thou fool. No living man may hinder me!"
― Éowyn and the Witch-king, The Return of the King, "The Battle of the Pelennor Fields"

Éowyn was a member of the House of Eorl and the niece of King Théoden of Rohan. She was renowned for slaying the Witch-king of Angmar. She was the daughter of Théodwyn, Théoden's sister, and Éomund of Eastfold; her brother was Éomer. Following the end of the War of the Ring, she and Faramir were married, and she bore one son, Elboron.[2]

"What do you fear, lady?"
"A cage. To stay behind bars, until use and old age accept them, and all chance of doing great deeds is gone beyond recall or desire."
― Aragorn and Éowyn, The Return of the King, "The Passing of the Grey Company"

Following the death of her parents in T.A. 3002, Éowyn and Éomer were brought into Théoden's house and raised there. Éowyn grew to be tall and slender, with a grace and pride that came from her mother.[2]

Prior to the Battle of the Hornburg, Éowyn was left to care for Meduseld when Théoden and Éomer led the remaining Rohirrim to the west. King Théoden named her ruler of Rohan in his and Éomer's absence when Háma recommended that one of "The House of Eorl" should rule. At first, Théoden only thought of the men of his house, of which he and Éomer were the last, but Háma reminded the King of Éowyn, who "is fearless," and that "all love her."[3]

Éowyn revealed her temperament when Aragorn was to ride into the mountains and take the Paths of the Dead. Unable to dissuade him, she desired to accompany him, declaring herself "weary of skulking in the hills," with a "wish to face peril and battle." However, Aragorn reminded her of her charge to govern the people until the king's return and left without her.[4]

Later, when the forces of Rohan were mustered to go to Gondor, Éowyn disguised herself as a man, and under the alias of Dernhelm, travelled with the Riders of Rohan, carrying with her Merry, who was also ordered to remain behind.[5]

During the Battle of the Pelennor Fields, she fought by King Théoden, and when he was struck down by the Witch-king of Angmar, she took it upon herself to defend the King of Rohan. Confronting the Witch-king, who boasted that "no living man may hinder me", she removed her helmet, revealing her long golden hair and declaring:

"No living man am I! You look upon a woman." 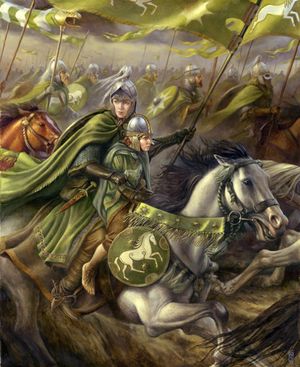 Though he was filled with doubt at her unveiling, the Witch-king fought her, and broke her shield and arm with his mace. Yet before he could strike her down, Merry, who had not been heeded by the Witch-king, struck him behind the knee with a Barrow-blade, crippling the wraith, and giving Éowyn the chance to thrust her sword between the crown and mantle, which shattered the blade. Thus Éowyn slew the Witch-king with Merry's aid, and fell upon her fallen foe, seemingly dead.[1]

She was granted the title "Lady of the Shield-arm" after the battle in recognition of her triumph, as her shield-arm had been broken in the fight.[1]

Shortly afterwards, Éomer found Éowyn beside Théoden, and, believing that both his sister and the King were dead, was filled with grief and fury. Taking the kingship of Rohan, he ordered that Théoden and Éowyn be taken to the Citadel. Éowyn was borne away alongside Théoden in honour, as she had fallen into a death-like sleep from the Black Breath, and was presumed dead. However, Prince Imrahil recognised then that she yet lived, and instead ordered that she be taken to the Houses of Healing, where she would receive help.[1]

Éowyn was severely injured, and because of the Black Breath of the Nazgûl, she faced certain death; however, she was treated soon after by Aragorn during his brief sojourn into Minas Tirith. After a while she awakened, and since she had not yet recovered fully, she was not permitted to join the Host of the West that would march on Mordor. However, whilst recovering in the Houses of Healing, she met Faramir, with whom she later fell in love.[6]

After the defeat of Sauron and the celebrations, on 8 May she followed her brother, now King of Rohan, back home to Edoras.[7]

Later, Éowyn settled in Ithilien, of which Faramir was made the ruling Prince. She was thereafter known as the Lady of Ithilien.[6][note 3] Éowyn and Faramir were married, and dwelt together in the hills of Emyn Arnen in Ithilien.[8] She kept her friendship with Merry, and when he became Master of Buckland in Fo.A. 11, she sent him great gifts, as did her brother from Rohan.[9]

They had at least one son (likely Elboron),[10] and their grandson was Barahir, who wrote The Tale of Aragorn and Arwen in the Fourth Age.[11]

Éowyn means "Horse-joy" or "lover of horses" in Old English (being a combination of her parents' names: Éomund and Théodwyn),[12] the language Tolkien adapted to represent Rohanese.[13]

Éo- sounds like "eh-ah" with the "ah" just barely pronounced, while y is the same sound as German ü or French u.

The "White Lady of Rohan" title given by Faramir to Éowyn of Rohan when they were together looking out from the walls of Minas Tirith and saw the huge cloud that rose above Mordor at the fall of Sauron[6] on 25 March T.A. 3019.[14]

In an early rough note, Éowyn was originally known as "Eowyn Elfsheen daughter of Theoden".[15] In the first drafts of her appearance, she was split into two characters: Éowyn, sister of Éomer, and Idis, daughter of Théoden. Tolkien eventually discarded Idis as Éowyn overshadowed her, and planned to have Éowyn wed Aragorn when he became the King of Gondor. However, Tolkien cut out the love story, deciding to make Éowyn "the twin-sister of Eomund, a stern amazon woman", and possibly dying to save or avenge Théoden.[16]

Just as MacDuff disconcerted Macbeth by revealing he was not "of woman born", Lady Éowyn found the loophole in the 1,000-year-old prophecy by Glorfindel, fulfilling that the Witch-king would not be slain by a man. However, the Witch-king actually recited the prophecy incorrectly: he said that "no living man may hinder me," though the prophecy actually said that "not by the hand of man will he fall."[17] Glorfindel's prophecy, unlike his own version, implies that the Witch-king will not fall to a man. In Tolkien's writing, man and woman applies simply to the gender of any Middle-earth race. Only when he capitalised Man did it denote the race of Men. The Witch-king may not have realised that the prophecy meant only a male, thus, his moment of doubt and hesitation when he faced Éowyn.[1]

Éowyn is briefly seen, but has no lines.

Éowyn is portrayed by Karen Hurley.

Éowyn is voiced by actress Nellie Bellflower. She appears unintroduced, but Merry fills Pippin (and so the spectator) in on the details. She is not terribly wounded, and appears healthy beside Faramir at the coronation.

Elin Jenkins plays the part of Éowyn. She is introduced much earlier than in the book when Gandalf escapes from Isengard and borrows a horse from Theoden. Unlike some adaptations her recovery in the Houses of Healing, and the blossoming of her relationship with Faramir are included. She is last encountered in the penultimate episode gifting Merry the horn he would blow later during the scouring of the Shire.

Éowyn is played by Donata Höffer.

Éowyn is portrayed by Miranda Otto. Jackson's adaptation shows two different explanations for Éowyn's injuries after fighting the Witch-king. In the Theatrical Release, her wounds are less severe than in the book; she is conscious but hurt, as opposed to unconscious. In the Extended Edition, she is near death; her brother finds her and grieves, and later she is healed in the Houses of Healing, where she meets Faramir.

The voice of Éowyn is provided by Diana Mórová. Éowyn is alluded to in The Two Towers, but has no lines. She appears fully in The Return of the King. Her role is identical to that in the books.

Éowyn is first met in Edoras, shortly before the arrival of Gandalf and the Three Hunters. After King Théoden departs with his host, the player stays behind and helps Éowyn with various preparations before moving the citizens to Dunharrow. As Dernhelm, she travels to Minas Tirith with permission of Elfhelm, who kept her secret and gave her the sword of her late cousin Theodred taken the Fords of Isen. It was that very that Eowyn used to slay the Witch-King of Angmar, though it broke in doing the deed. After healing from her wounds, she attends the coronation of King Elessar, but departs for Edoras prior to Aragorn and Arwen's wedding.