Grishnákh was a captain of Orcs from Mordor.[1] He was described as being a short, crook-legged creature, broad, with long arms hanging almost to the ground.[2]

On 26 February T.A. 3019[3] Grishnákh was part of a raiding party that captured Merry and Pippin at Parth Galen. He was the captain of a group of Mordor-orcs which had joined Uglúk's forces on the plains of Rohan during the War of the Ring. When Pippin awoke and heard the Orcs arguing he noted that Grishnákh's voice sounded softer but more evil than the others. Grishnákh threatened to report the doings of the mountain-orcs and of Uglúk to Lugbúrz (Barad-dûr).[2]

On 28 February[3] Grishnákh and his followers split from Uglúk's company to head east, but fell back in with the Isengarders when Éomer's riders drew near. In the nighttime when he had a chance, Grishnákh attempted to search the hobbits for the One Ring (how he knew about it is unknown; possibly he was present at the torture and interrogation of Gollum in Barad-dûr). After hearing Pippin imitate Gollum's croaking noise, he believed they had the One Ring and tried to escape with the two hobbits. Before he could accomplish this he was slain by the Riders of Éomer near the eaves of Fangorn Forest.[2]

The earlier form of the name Grishnákh used by Tolkien was Gríshnák.[4] 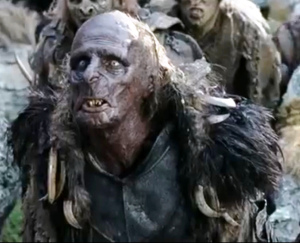 Grishnákh in The Lord of the Rings: The Two Towers

No individual orcs are identified - or identifiable, but one orc yells "Grishnákh" to another when they are surrounded by the Rohirrim. Merry also tells one orc (as with the book) that if the Ring goes to Isengard there will be nothing "for poor Grishnákh".

Grishnákh is played by Stephen Ure. He is a common orc who is crushed by Treebeard after he attempts to kill Merry and Pippin.

The voice of Grishnákh is provided by Eduard Vitek.

Grishnákh is a captain in the evil faction. He is voiced by David Lodge.