Gríma Wormtongue was the chief counsellor of King Théoden of Rohan and the son of Gálmód.[2] He became Saruman's mole at the court of Edoras, relaying to him the happenings in realm as well as weakening Théoden with his words and poisons. His treachery revealed and unwilling to ride to war against the Enemy, Gríma fled to Isengard and later to the Shire, where he slew his abusive master only to be shot down by the Hobbits' arrows.

Gríma son of Gálmód was the advisor of Théoden, King of Rohan in the late Third Age. At some point, Gríma was ensnared by the corrupted Wizard Saruman, who had promised him Éowyn in exchange for the former acting as his spy and agent. Gríma not only informed Saruman about the secrets and movements of Rohan, but also actively worked to weaken the ailing Théoden with his deceitful counsels and subtle poisons administered as remedies for the easing of old age. Seeing that Théodred and Éomer were the main obstacles to the Wizard's takeover of the kingdom, Gríma tried to cause disagreement between the two men and when he failed, he instead resolved to paint Théodred as a soft-hearted heir and Éomer as a power-hungry warmonger in the clouded mind of Théoden. Wormtongue's exploits allowed Saruman to aid Rohan's enemies and amass a significant host in Isengard unfettered, much to both the Dark Lord Sauron's and his own advantage.

During the War of the Ring, the Nine Nazgûl came to Rohan on their hunt for the Ring-bearer and stumbled upon Gríma on their way, the latter whom was hurrying to Isengard to tell Saruman of the Wizard Gandalf's arrival in Edoras. Terrified, Wormtongue answered their questioning with those same news that the Grey Pilgrim had passed through Rohan, and also told them where the Shire was and how to reach it. He also revealed that Saruman had lied to them in order to deny them this information, a sign of his only half-hearted faith to their common master, Sauron. Seeing that Wormtongue would not betray their interrogation of him to the Wizard and believing his opportunism may continue to be of use to the Dark Lord and do harm to the treacherous Wizard, the Witch-king of Angmar spared Gríma's life.[3]

Upon Gandalf's second coming to Edoras, Gríma tried to discredit him, until the White Wizard managed to heal Théoden. After this, "many things which men had missed" were found locked in Gríma's trunk and he was given a grim choice: ride into battle with his liege and so prove his good faith or into exile.[2] Choosing the latter, he went to dwell with Saruman at Orthanc, where he witnessed the disastrous Battle of Isengard. Following the confrontation between Saruman and Gandalf, he mistakenly threw a "heavy rock"—which was actually the palantír of Orthanc—at either his master or the outsiders, for "he couldn't decide which he hated the most". Saruman seems to have punished him severely for this act.[4] 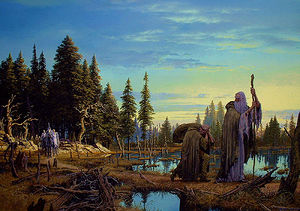 Saruman is Overtaken by Ted Nasmith

While being held in Orthanc, Gríma became weak and thin and was subjected to Saruman's mistreatment of him. When Treebeard released him and Saruman in August, they left and headed west. On their way, they were confronted by Gandalf, Celeborn, Galadriel and the Hobbits on their way to northern Dunland. They found them as travelling beggars and Saruman kicked Gríma to move on, as he exclaimed how he hated his master. Galadriel told Gríma that he was free to leave him whenever he wished but he did not reply and he continued to follow the Wizard.[5]

Saruman had already been exerting his control over the Shire from afar by sending evil Men there and puppeteering Lotho Sackville-Baggins's rise to power, thus the fallen Wizard sought his revenge in petty tyranny as "Sharkey" over the Hobbits who indirectly ensured his downfall. During this time Gríma became increasingly degraded until he was a crawling wretch, almost resembling Gollum, and Saruman shortened his nickname to "Worm" in derision. During this time he murdered the now-useless Lotho on his master's orders, and may have eaten him.[6]

The return of Frodo Baggins and his companions to the Shire resulted in the Hobbits rallying against the brigands and overthrowing Sharkey. Spurred by the words of Frodo that he did not have to follow Saruman, and being pushed over the edge when Saruman scorned him yet again, Gríma used a hidden knife to slit the throat of his oppressor from behind and then darted down the road. He was quickly shot dead by several Hobbit arrows, and thus Wormtongue was the final casualty of the War of the Ring, an unhappy and short-lived wretch who sold his soul to the side of the Enemy and paid the price for his folly.[6]

The name Gríma derives from the Old English or Icelandic word meaning "mask, visor, helmet" or "spectre, larva".[7][8][9] It is also possible to link the name to the English word "grim", which among other characteristics meant "ugly" in Old English.[10]

Wormtongue is a modernised form of Old English wyrm-tunge ("snake-tongue").[11]

J. Allard suggests that Gríma was based on or inspired by Unferth from Beowulf, a character that sits near King Hrothgar and serves as a taunter.[12]

Paul Brooke played Gríma. He is introduced much earlier than in the book in excerpts from The Hunt for the Ring when he is questioned by the Nazgûl on his way to Isengard. His death at Bag End is also included in the final episode.

Gríma is played by Brad Dourif. The reason for Gríma's pale and emaciated appearance in the movie is not entirely clear. Perhaps it is meant to suggest that by throwing in his lot with Saruman he has started down the same path to physical and mental corruption that caused Gollum to become a twisted parody of his original self, although it is just as likely that Jackson simply wanted to make it clear that Wormtongue was one of the "bad guys" in what may seem large and confusing cast of characters to the audience.

The events of "The Scouring of the Shire" do not appear in the film version, so Saruman's death was moved to an earlier scene. Other than the location, which was moved to the Tower of Orthanc, the manner of their deaths is very much the same. As in the book, Gríma kills Saruman, but by stabbing him in the back, not slitting his throat. Saruman's body then falls from the tower and is impaled on a spiked wheel, one of the remnants of his infernal machines. Gríma himself is shot by an arrow fired by Legolas, thereby mirroring his death in the book. This scene was to have included a line where Saruman blamed Gríma for killing Théodred, replacing Lotho in the context of that scene, but the line was cut out.

The voice of Gríma is provided by Ivan Gogál.

Gríma Wormtongue, having the skill Seeds of Doubt, appears in the instance quest The Wizard's Vale.[13][14]

Kirk Thornton did the voicework of Gríma.[15]

Gríma Wormtongue appears as a minifigure in the video game.[16]