Dunland was a country near the western slopes of the Misty Mountains at their southern end.[1] It was located east of the Old South Road, south of the river Glanduin and north of the river Isen in the region of Enedwaith.[2] Far from the centres of population of Arnor and Gondor, its inhabitants at times included the Men known as Dunlendings[3] as well as Stoors[4] and Dwarves[5].

Dunland was a fair, fertile land. By the end of the Third Age being neither prosperous or civilised, it was sparsely inhabited by unorganised herdsmen and hillmen.[6]

In the early Second Age, Dunland first acquired a significant population of Men when those who had dwelt in the forests of Enedwaith south of the Gwathló fled from the Númenóreans after they began to cut down all of the trees.[7]

When the kingdoms of Arnor and Gondor were established early in the Third Age the land of Enedwaith (and the region of Dunland) were largely ignored, although the inhabitants were nominally subjects of Gondor.[8]

About T.A. 1150, the Hobbit-breed known as the Stoors left their early homeland in the upper vales of the Anduin and crossed the Redhorn Pass. Some settled in the Angle and others travelled down the Loudwater and settled in Dunland. While the Stoors in the Angle vacated that area in 1356, those living in Dunland remained until around 1630 when they migrated to the newly founded Shire.[9]

Middle Years of the Third Age[edit]

The Great Plague swept through the north-west of Middle-earth in the years T.A. 1636 – 1637.[9] Dunland suffered, but to a lesser extent than in other regions due to their self-isolation. After the end of the royal line in Gondor the Dunlendings ceased to be subjects of the realm. During the years of the Watchful Peace (1975 – 2050), as the people of Calenardhon dwindled, the Dunlendings began drifting across the Isen.

The expansion of the Dunlendings to the southeast of Dunland was checked when the new realm of Rohan was established in 2510. In the subsequent centuries there was tension between the Dunlendings and the Rohirrim.

After T.A. 2770,[9] Dwarves fleeing the Sack of Erebor settled in Dunland, from where Thrór departed when he and his companion Nár journeyed to Moria in T.A. 2790. After the Battle of Azanulbizar, provoked by the Orcs' brutal slaying of Thrór, Thráin II and Thorin led the remnants of their followers back to Dunland. They left soon after, to eventually settle in the Ered Luin.[10]

Beren's decision to trust Saruman however had severe consequences, as before and around the War of the Ring, the Wizard inflamed the Dunlendings' grievance and enmity to the Rohirrim[11] and concentrated a great military force which besieged them at the Helm's Deep. After the Battle of the Hornburg, the Rohirrim allowed the surviving Dunlendings to return to their homes. The Rohirrim required that all hostilities cease, and that the Dunlendings retreat behind the Isen river again.[12]

After the War the four Hobbits, Frodo, Sam, Merry, and Pippin, with the company of Gandalf, Celeborn, Galadriel, and others journeyed through Dunland on their way home. While traversing the region they met two beggars, Saruman and Gríma Wormtongue.[13]

The name Dunland contains the element dunn.[3] The English adjective dun means "dark, dusky, dull-hued".[14] This name was given by Rohirrim of neighbouring Rohan after arriving in nearby Calenardhon in the later Third Age. The element dunn has no relation to the Sindarin word dûn ("west").[3]

Dunland is mentioned when a flock of Crebain appears when the Fellowship is in Hollin; and Legolas identifies them as such and being from Dunland.[15] The crebain later report to Saruman at Isengard.[16] 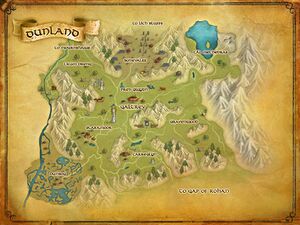 Map of Dunland from The Lord of the Rings Online.

The Dunland region includes Dunland proper as well as the Gap of Rohan and Nan Curunír. However, the northern extent of Dunlending territory, including where Thrór and his people settled, is found in the Enedwaith region.

Many tribes of the Dunlendings exist, with some warring against one another, or fighting against the White Hand. Dunland's chief settlement is "Galtrev".