The Watchful Peace was a relatively peaceful 4-century period during the Third Age, from T.A. 2063, when Sauron, then known as "the Necromancer", fled from Dol Guldur to hide himself from the Wise until his return in 2460.

When Arnor reestablished relations with Gondor, Kings Araphant and Ondoher realised that a single force was co-ordinating the attacks on both of their kingdoms and that they should work together to combat the evil. However it was already too late; the Witch-king of Angmar managed to overthrow Arthedain, the last remnant of the Northern Kingdom of Arnor. Angmar was in turn destroyed by the forces of Gondor and the Elves.[1][2]

The Nazgûl gathered back in Mordor to prepare for Sauron's return;[3] they subsequently captured Minas Ithil in T.A. 2002, and Gondor suffered the end of the line of the Kings of Gondor with the loss of Eärnur in T.A. 2050. The Dwarves of Khazad-dûm also suffered a major loss with the awakening of a Balrog and the subsequent evacuation of Khazad-dûm, which caused many Galadhrim to seek to leave Middle-earth.[1][2] By T.A. 2060 the shadow of Dol Guldur grew so much that the Wise realised that Sauron was returning there.[2] 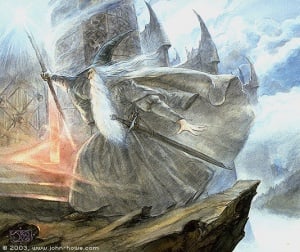 But Sauron's plans were to change; in T.A. 2063 Gandalf went there to investigate; the "Necromancer" fled to the East.[2]

During his absence, the Nazgûl remained quiet in Minas Morgul.[2] The Shadow on Mirkwood had lessened, but the Nazgûl had used this period to prepare for Sauron's return, who, in the meantime, was corrupting the Men of the East.

The first ten Ruling Stewards had relative calm in which to renew their strength. These included Mardil Voronwë, Eradan, Herion, Belegorn, Húrin I, Túrin I, Hador, Barahir, Dior, and Denethor I.

During the Peace Gondor strengthened its borders, keeping a watchful eye on the east, as Minas Morgul was still a threat on their flank and Mordor was still occupied with Orcs. But no major escalations occurred except for minor skirmishes with the Haven of Umbar.

During the Peace the garrisons of the forts of Calenardhon (which was depopulated during the Great Plague) were not renewed, and local chieftains (whose subjects were increasingly of mixed blood) gained more control.[4]

The first seven Chieftains of the Dúnedain ruled their people, the Rangers of the North, during the Watchful Peace: Aranarth, Arahael, Aranuir, Aravir, Aragorn I, Araglas, and Arahad I. Even before the Peace ended, evil things such as wolves and Orcs secretly invaded or attacked Eriador.[5]

The Hobbits of the Shire prospered and even expanded and appointed a Thain to take the role of the King, the first being Bucca,[5] and Isumbras I became the first Tookish Thain later; Buckland was first occupied by Oldbucks at this time.

He was followed as King of Durin's Folk by Glóin and Óin.

The Éothéod dwelt in the north vales of Anduin during the Watchful Peace.

Further south, some Stoors inhabited the areas near the Gladden Fields, having settled there some centuries ago to flee the shadow of Angmar, and formed a matriarchal society.[5][6] Sméagol was born and spent his youth there toward the end of the Watchful Peace.[2][6]

A new race of Orcs was bred in Mordor, the Uruk-hai.[7] But Sauron was not idle in the east either: he created a strong alliance between the various tribes of Easterlings, so that when he returned he was more powerful and had many Men in his service.[source?]

In T.A. 2460, Sauron returned with new strength. His return coincided with the One Ring's discovery and Sméagol claiming it three years later. In c. T.A. 2480 Orcs began to spread again in the Misty Mountains in order to block all passes into Eriador, whilst Sauron's creatures took Moria as their own. In the next years Ithilien and Osgiliath were devastated by the Uruk-hai.[2]

Elrond mentions a "watchful peace" that as of T.A. 2941 has lasted for "four hundred years", referring to the absence of Sauron. In the context of the movie (which is quite different than the canonical chronology), Sauron had been inactive between T.A. 2541 and 2941, when the Necromancer first emerges.