"...and others, too, came out of the forest. Great Orcs, who also bore the White Hand of Isengard: that kind is stronger and more fell than all the others."
― Éomer in The Two Towers, "The Riders of Rohan"

The Uruk-hai were a new breed of Orcs that appeared during the Third Age.

They were faster than normal Orcs and could travel during the day without being weakened. They were not only faster but smarter, stronger and larger, though they were still shorter than Men.

The Uruks in the service of Barad-dûr, the folk of Mordor, used the symbol of the Red Eye of Sauron. The Red Eye was also painted on their shields. At least one, a guard on the march with Merry and Pippin, had a black knife with a long saw-edged blade, used by Pippin to cut through the ropes on his hands. It is not clear whether or not these Uruks of Sauron should be regarded as identical with the Uruks of Saruman, who could be a further 'improvement' to the race achieved prior to the war.

The Uruk-hai in the employ of Orthanc used an S elf-rune wrought in white metal on the front of their iron helms. It was clear this "S" stood for Saruman, because their shields had a small White Hand of Saruman centered on a black field. Aragorn commented that their gear was not in the manner of other Orcs at all. Instead of curved scimitars, they used short, broad-bladed swords. Their great bows were made of yew wood, in length and shape as those of Men. Although they did not like the light of the Sun, they could withstand it better than other orcs. Saruman promised them man-flesh as a treat.

The race of Uruks, described as "black orcs of great strength", first appeared out of Mordor in the last years of the Stewardship of Denethor I. In T.A. 2475 they conquered Ithilien and destroyed the city of Osgiliath, but they were defeated by Steward Boromir later.[1] The following years, Orcs of Mordor - among them Uruks - continued to infest Ithilien, further deserting it by T.A. 2901.[2]

Around T.A. 2990, the corrupted Wizard Saruman began to use and possibly breed Orcs in Isengard.[3]. As the Shadow of the Enemy fell over Rohan, Uruks out of Isengard joined raiding parties of Orcs of the Misty Mountains against the Rohirrim.[4]

In the War of the Ring, the Uruks of Mordor referred to the Dark Lord Sauron as the Great Eye, and Shagrat was the commanders of one such garrison at Cirith Ungol, while Gorbag was an Uruk captain of Minas Morgul.[5] 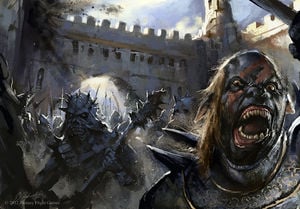 The Uruk-hai of Isengard made up the core of a ten-thousand strong army, mustered by the Wizard Saruman both in service to, and in tacit competition with, his Lord Sauron.[6] Joined by Dunlendings and the common Orcs of Isengard, they fought against the Rohirrim in the First and Second Battle of the Fords of Isen.[7], notably slaying Prince Théodred. The Uruk-hai army was then sent against King Théoden and his people at Helm's Deep, where they faced utter defeat in the Battle of the Hornburg.[8]

Behind his Master's back, the corrupted Wizard sent a smaller troop to capture the Ring-bearer for his own ends. These Uruks were led by Uglúk and ambushed the Fellowship of the Ring at Amon Hen, slaying Boromir and capturing Merry and Pippin. Though quarreling with the Mountain-orcs and Grishnákh's Mordor-orcs who had joined them, the Uruks imposed Isengard as the destination for the captive Hobbits. Saruman aided them with his sorcery as well: when Aragorn, Gimli, and Legolas followed the Orc-company, Saruman's will caused weariness of the heart for the pursuers and lent speed to his Uruks.[source?] The Uruk-hai troop and the other two Orc warbands were slain to the last on the eaves of Fangorn by Third Marshal of the Riddermark Éomer and his riders.[9]

On 29 February T.A. 3019,[10] Treebeard said to Merry and Pippin that Saruman had done something dangerous to the Orcs and that those Orcs were more like wicked Men, because they could tolerate sunlight although they hated it. He openly wondered if they were Men that Saruman had "ruined" or if he had "blended" Orcs and Men, an act which Treebeard considered to be "a black evil".[11]

After Samwise Gamgee's fight with the Spider Shelob, two Orc-troops led by the Uruk captains Shagrat and Gorbag stumbled upon the unconscious Frodo Baggins and carried him as their prisoner to Cirith Ungol.[12] Squabbling among themselves over Frodo's belongings, the Orcs and Uruks slaughtered each other, allowing Sam to enter the unguarded tower and rescue Frodo.[13] 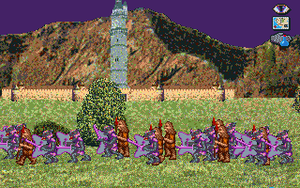 In Peter Jackson's The Lord of the Rings, the Uruk-hai are shown as being released from a kind of membrane in the mud deep under Isengard (special commentary on the DVD edition explained that they were trying to base the scene on an early description of Tolkien's that Orcs "worm their way out of the ground like maggots"). In the movies Uruk-hai are described as a crossbreed between "Orcs and Goblin-men". This is a reference to the creatures mentioned by Gamling in the novel that blend the traits of Orcs and Men. These Uruks are sent after the Fellowship, and their initial captain is Lurtz, a movie-only character.

The Uruks of Isengard included Pikemen, Swordsmen, Archers, and Berserkers. The Berserkers are the shock troops. When they were first spawned a helmet filled with blood was placed on their heads, so that they were filled with a bloodlust for their enemies. They carry doubly-bent swords, and forgo any armour in lieu of agility, slaying foes left and right, completely devoid of fear and pain. Pikemen, as the name suggests, carry long pikes, while archers carry crossbows. Swordsmen wield a straight iron sword, hooked at the tip, and deadly in an Uruk's strong grip. They also use bladed shields, as seen in Amon Hen during Aragorn's fight against Lurtz. 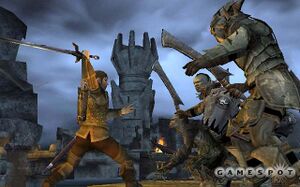 Uruk-hai in the cancelled video game The Lord of the Rings: The Treason of Isengard

Uruks once more fill in for the common Orcs. They are a confederation of various tribes: the Dark, Mystic, Terror, Slaughter, Warmonger, Outlaw, Feral and Machine Tribes.