The First Battle of the Fords of Isen was the first of two conflicts at the Fords of Isen, and marked the beginning of the War of the Ring. On February 25, T.A. 3019, Saruman attacked the Rohirrim army under Théodred, Grimbold and Elfhelm. Saruman's main objective was to kill Théodred. After Théodred was slain Saruman's army withdrew.

The chief obstacles to an easy conquest of Rohan by Saruman were Théodred and Éomer. They were devoted to the King and were high in his affections, as his only son and his sister-son. They did all that they could to thwart the influence that Gríma gained when the King's health began to fail. It was Gríma's policy to bring his chief opponents into discredit with Théoden. But the steadfast loyalty of Théodred and Éomer to their king even in his apparent dotage made it very difficult for Gríma to achieve this. Gríma therefore tried to play them one against the other in the mind of Théoden, representing Éomer as ever eager to increase his authority. In this he achieved some success, which bore fruit when Saruman at last succeeded in achieving the death of Théodred.

Saruman had given special orders that Théodred should at all costs be slain. All his fiercest warriors were engaged in reckless assault upon Théodred and his guard, disregarding other events in the battle, which might otherwise have resulted in a much more damaging defeat for the Rohirrim. The river Isen came down swiftly from its sources above Isengard. In the flat land of the Gap the river became deep and rapid and it could only be crossed at the Fords of Isen. Saruman had an advantage as he could send his troops down either side of the Isen and attack the fords, if they were held against him, from both sides. On the other hand, Théodred might send his troops across the fords, either to engage Saruman's troops or to defend the western bridge-head. But if they were worsted then they would have no retreat except back over the fords with the enemy at their heels, and possibly also awaiting them on the eastern banks.

Saruman's attack was not unforeseen, but it came sooner than was expected. Théodred's scouts had warned him of a mustering of troops, at the Gate of Isengard, mainly on the west side of the Isen. He therefore manned the approaches, east and west, to the fords with sturdy men from the Westfold. He also left three companies of Riders, along with horse-herds and spare mounts, on the east bank. Théodred himself passed over with the main strength of his cavalry: eight companies and a company of archers, intending to overthrow Saruman's army before it was fully prepared. Saruman however had not revealed his true intentions nor the full strength of his forces.

Some twenty miles north of the fords Théodred encountered the enemy's vanguard and scattered it, however when he attacked the main host he found that the enemy was in fact prepared for the assault, behind trenches manned by pikemen. And Théodred in the leading Éored was brought to a stand and was almost surrounded. He was extricated by the onset of the companies coming up behind him. But when he looked eastward he was dismayed. Away east of the river he saw other forces now hasting towards the fords. He at once ordered a retreat. But retreat was often delayed, when the rearguard under Grimbold was obliged to turn and drive back their pursuers.

When they finally reached the fords the day was waning. Théodred set Grimbold in command of the garrison on the west bank, stiffened with fifty dismounted riders. The rest of the riders and all the horses he at once sent across the river, while he along with his company manned the eyot in the midst of the river, to cover the retreat of Grimbold if he was driven back. This was barely done when Saruman's eastern forces came down with unexpected speed. The eastern force was much smaller than the western force, but it was more dangerous. In its van were some Dunlending horsemen and a pack of wolf-riders. Behind them came two battalions of Uruks, heavily armed and trained to move at great speed. The garrison of the east bank was swept away by the sudden attack and the riders who had just crossed the river were caught still in disarray, and though they fought desperately they were driven from the fords with the Uruks in pursuit.

As soon as the enemy gained control of the eastern end of the fords, a company of men and orc-men appeared, mail-clad and armed with axes. They assailed the eyot from both sides. At the same time Grimbold on the west bank was attacked by Saruman's forces on that side. When he looked eastward he was dismayed to see the axe-men driving Théodred's men from the shores of the eyot towards the low knoll in its centre. At once Grimbold, taking a few men that stood near him ran back to the eyot. So fierce was his onset that he clove his way through the rear of the attackers, till with two others he reached Théodred standing alone on the knoll. But he was too late. As he came to his side Théodred fell, hewn down by a great orc-man. Grimbold slew the attacker and stood over the body of Théodred, thinking him dead; and there he would himself soon have died, but for the coming of Elfhelm.

Elfhelm had been riding in haste from Edoras, leading four companies in answer to Théodred's summons. When he reached the junction of the horse-road and the road down from the Deeping, his outriders reported that two wolf-riders had been seen abroad on the fields. Sensing that something was amiss, he did not turn aside to Helm's Deep for the night as he had intended but rode with all speed towards the fords. And though his men and horses were weary, as he came in sight of the east banks, he ordered his companies to charge. It was the turn of the Isengarders to be surprised. Few stood their ground. Most fled northwards, pursued by two of Elfhelm's companies. The others he dismounted to guard the east bank, but at once with the men of his own company rushed to the eyot. The axe-men were now caught between the surviving defenders and the onslaught of Elfhelm, with both banks still held by the Rohirrim. They fought on, but before long were slain to a man. Elfhelm himself, however sprang up to the knoll and there he found Grimbold fighting two great axe-men for the possession of Théodred's body. One Elfhelm at once slew, and the other fell before Grimbold.

When they stooped to lift the body, they found that Théodred still breathed; but he lived only long enough to speak his last words. Then a harsh horn sounded, and then all was silent. The attack on the west bank ceased and the enemy there faded away into the dark.

The Rohirrim held the Fords of Isen; but their losses were heavy, the King's son was dead, they were leaderless, and did not know what might yet befall. When the grey light of dawn returned, there was no sign on the Isengarders, except for those many that they left dead upon the field. Many men who had been scattered by the sudden assault began to return, some still mounted, others leading recaptured horses. Later on in the morning, most of Théodred's Riders that had been driven south down the river came back battle-worn but in good order. They had a similar tale to tell. They came to a stand on a low hill, and prepared to defend it. Though it was now full night, a horn was sounded, and soon they discovered that the enemy had gone. After some time they began cautiously to advance north again. But when they reached the Fords they were surprised to see the Rohirrim in command. 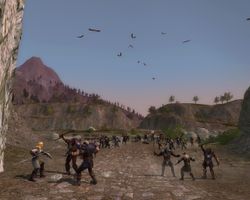 Éomer and his riders encounter the aftermath of the battle, and retrieve the ailing body of Théodred. After one of his riders swears vengeance to Mordor, Éomer sets him straight that it is Saruman's doing.

The battle is recreated in the game, matching the description from The Unfinished Tales.