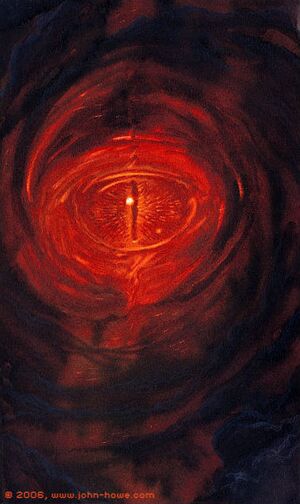 The Eye of Sauron by John Howe

"He took up again the great Ring and clothed himself in power; and the malice of the Eye of Sauron few even of the great among Elves and Men could endure."
― Of the Rings of Power and the Third Age

The Eye of Sauron, generally called the Eye, was a symbol of Sauron the Dark Lord, mainly acknowledged when it was perceived by Frodo Baggins while carrying the One Ring. The Eye was projected as a mental image to show Sauron's unceasing vigilance and piercing perception. It was displayed as an emblem on the weaponry of Sauron's servants, or at least the Orcs'.

Sometimes used as a synonym for Sauron himself, it is also referred to as the Eye of Barad-dûr, the Eye of Mordor, the Great Eye, and the Lidless Eye; and particularly as an emblem, the Red Eye or Evil Eye.[1]

With the Downfall of Númenor, the fair shape of Sauron had been destroyed, so when he came back to Mordor, he was forced to take a different one. Once in Barad-dûr with his Ring, he wrought a new shape: "an image of malice and hatred made visible; and the Eye of Sauron the Terrible few could endure."[2] From the Window of the Eye, the piercing Eye looked westwards in the direction of Mount Doom.[3]

Much later, in the Third Age, Frodo met Galadriel during the Quest of the Ring, and she allowed him to see into her Mirror. This showed him many things:

But suddenly the Mirror went altogether dark, as dark as if a hole had been opened in the world of sight [...]. In the abyss there appeared a single Eye that slowly grew, until it filled nearly all the Mirror. So terrible was it that Frodo stood rooted, unable to cry out or to withdraw his gaze. The Eye was rimmed with fire, but was itself glazed, yellow as a cat's, watchful and intent, and the black slit of its pupil opened on a pit, a window into nothing.
Then the Eye began to rove, searching this way and that...

Horrified, Frodo knew that the Eye was looking for him, among many other things, and it was trying to get into his mind if he allowed it. Once the vision ended, Galadriel told him that she knew what he had seen, for she could perceive Sauron, constantly trying to read her thoughts. "But still the door is closed!"[4]

Some days later, Frodo ran away from Boromir while wearing the Ring and sat upon the Seat at Amon Hen. There he could see many places attacked by the Dark Lord, until the vision showed him Mordor and Barad-dûr. Feeling hopeless, he felt the Eye within the Dark Tower, an eye "that did not sleep". Both Frodo and Sauron became aware of each other at that moment, but the will of Sauron began affecting him and almost became aware of his location, before Frodo jumped out of the Seat and took off the Ring.[5] Gandalf took part in this mental battle with the Eye, for he struggled with the Eye of Mordor, which left him very weary.[6]

As Frodo approached the Gates of Mordor, the weight of the Ring became almost physical, but worst was the Eye, as he called it: "that horrible growing sense of a hostile will that strove with great power to pierce all shadows of cloud, and earth, and flesh, and to see you [...]. Frodo knew just where the present habitation and heart of that will now was: as certainly as a man can tell the direction of the sun with his eyes shut. He was facing it, and its potency beat upon his brow." Gollum probably felt the Eye's pressure too, but he was too focused on his desire for the Ring.[7] Sam could also feel the Eye while wearing the Ring in the Tower of Cirith Ungol, searching for the Ring-bearer in the shadows which it had created.[8]

While entering Mount Doom, Frodo and Sam could see the Eye in plain sight in the Window when winds removed the surrounding darkness of Barad-dûr: "One moment only it stared out, but as from some great window immeasurably high there stabbed northward a flame of red, the flicker of a piercing Eye." Fortunately for them, Sauron was not watching the entry of the Orodruin, but looking northwards towards the Army of the West; but the vision of the Eye deeply shocked Frodo.[3] 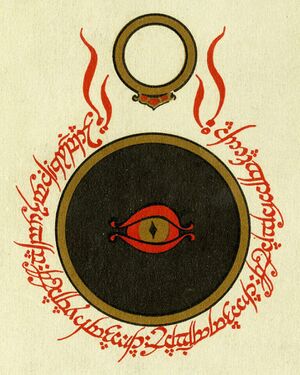 The Eye of Sauron as drawn by J.R.R. Tolkien in The Lord of the Rings first edition covers.

During the War of the Ring, the Orcs of Mordor used the Red Eye as a sign, in contrast with the white "S" rune used by the Orcs of Isengard.[9] They had it painted in banners upon black,[10] on their helmets,[11] and on their shields.[12] Sam could also see the symbol in a livery at the Tower of Cirith Ungol.[13]

Sometimes Orcs used the eye for mockery of others, as in the vandalized statue of a Gondorian king,[14] or in the severed human heads thrown against Minas Tirith.[15]

In the earliest version of the legendarium in The Book of Lost Tales, the precursor of Sauron was the cat Tevildo, whose eyes "were long and very narrow and slanted, and gleamed both red and green".[17] In a following phase of the legendarium, Thû (an earlier name for the character of Sauron) watched the vale of Sirion "with sleepless eyes of flame", and when facing Felagund, "his flaming eyes he on them bent".[18] As Donald O'Brien explains, the Eye of Sauron was not meant to replace these previous versions, but it is the result of an evolution that came from them, in which even the earliest feline characteristics remained.[19]

The card "Eye of Sauron" appeared in The Wizards (the first set for the game), used to improve the prowess of each automatic-attack against other players. "The Lidless Eye" appeared in the set The Lidless Eye, and can be used by players to enhance their general influence. "Blazon of the Eye" is also in this set, used to direct influence against factions. "Eye Never Sleeping" appeared in Against the Shadow, and cancels one hazard creature attack.

In Peter Jackson's film adaptation, the Eye appears to Frodo on several occasions. However, it is also featured as a physical, living object between the pinnacles of Barad-dûr. This is usually interpreted as Sauron's actual physical form during the War of the Ring. However, in the extended edition of The Return of the King, there is a scene where the camera zooms into the pupil of the Eye, briefly revealing Sauron in his humanoid, armoured form. In the film the Eye also literally searched the lands of Mordor with a red beam of light like a spotlight, and the light could be seen constantly sweeping the lands. It was quenched when the One Ring was cast into Orodruin.

In The Desolation of Smaug, the Eye is shown, in which the pupil slowly becomes Sauron's shape as seen in The Lord of the Rings film series. Once we zoom into the Eye, we go through the pupil and see the Eye again, as an endless circle of the Void, portraying the 'window into nothing' from Tolkien's description.