The mountain erupted in S.A. 3429, signalling Sauron's attack on Gondor and it took the name Amon Amarth, "Mount Doom". 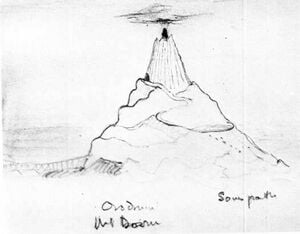 It stood alone in an empty plain, the Plateau of Gorgoroth and was connected to the Dark Tower with Sauron's Road, rising about 4500 feet with its base about 3000 feet tall.[3][4] The Road approached the east side of the base at a causeway and then wound up like a snake; at that point, the Road seemed damaged by the lava and re-repaired several times.[4]

According to Karen Fonstad, Mount Doom was obviously a stratovolcano, composited by alternating layers of ash and lava. Towering at only 4500ft, it was relatively short.[4]

Mount Ngauruhoe was used as Mount Doom in some scenes. In long shots, the mountain is either a large model or a CGI effect, or a combination. It was not permitted to film the summit of Ngauruhoe because it is sacred to the Maori of the region. However, some scenes which showed the slopes of Mount Doom were filmed on the actual slopes of Mount Ruapehu. 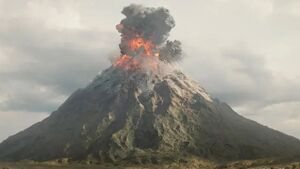 The eruption of Orodruin in The Lord of the Rings: The Rings of Power.

1 September: A Shadow of the Past:

During the late Second Age, Orodruin is shown within the Southlands to be a dormant volcano with a snow cap. Its slopes are covered with forests and the surrounding plateau is inhabited by the Southlanders.

After the battle of Tirharad, Waldreg activates a mechanism at the ruins of the Watchtower of Ostirith, triggering a flood of water to travel to Orodruin though underground Orc-made tunnels. The collision between the flood and the fires of Orodruin results in a volcanic eruption, which destroys the Southlands.

After the eruption of Orodruin, the Southlanders flee the Plateau of Gorgoroth. During this escape, Ontamo is killed, Queen Regent Míriel is blinded and Isildur is supposedly lost amidst the flames.