The Battle of Dagorlad by John Howe 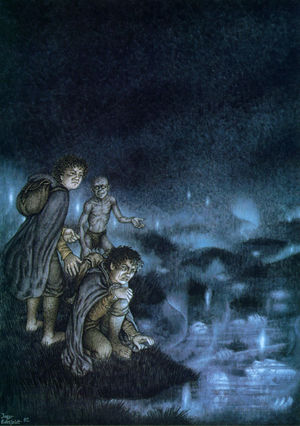 The Dead Marshes by Inger Edelfeldt

The Dead Marshes are depicted in this film.

The Dead Marshes are depicted in this video game with player travelling there.

The Harfoot community, followed by the Brandyfoot family, Poppy Proudfellow, and The Stranger, cross through the Grey Marshes during their migration east to the Grove. In the scene, the Harfoots and the Stranger attempt to push their carts out of a pool of water. On the map within the episode, the Grey Marshes are depicted at the location where the Dead Marshes would be.